The Finance and Leasing Association (FLA) has reported a 6% rise in point-of-sale consumer car finance volumes in July as the value of new business rose by 11%.

Figures published by the FLA today (September 7) showed that point of sale (POS) consumer car finance new business volume growth resulted in 193,939 vehicle sales during the month, with the value of advances amounting to £2.89 billion. 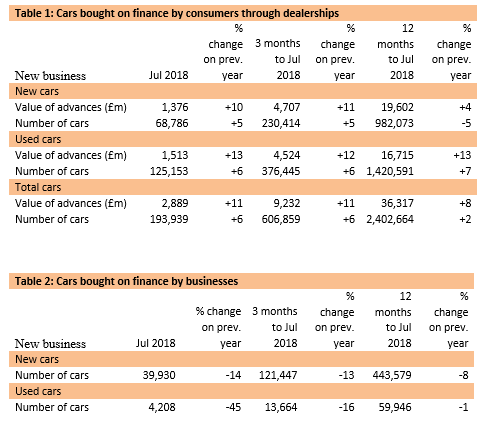 The results came in a month which generated 1.17% growth in new car sales, according to data published by the Society of Motor Manufacturers and Traders, with 163,898 vehicles registered (2017: 161,997).

Used car business showed greater strength in the sector during July, with its overall POS finance volumes up 6% and 13% y value, as new car performance increased by 5% by volume and 10% by value.

The FLA’s data showed that the number of new cars financed during the period dropped by 14% and used cars by 45%.

The FLA said that the percentage of private new car sales financed by FLA members through the POS was 89.8% in the twelve months to July.

Commenting on the figures, Geraldine Kilkelly, head of research and chief economist at the FLA, said: “The point of sale consumer car finance market reported new business volumes up by 4% in the first seven months of 2018, in line with expectations of modest single-digit growth in 2018 as a whole.”