The HMRC has announced a policy change in the VAT treatment of PCP vehicle sales which is likely to have a major impact on the future of the car retail market.

What is the change?

In simple terms, the supply of a car by a finance company to a customer will be treated as a supply of services rather than a supply of goods in most cases.

Why has this changed?

A typical customer considering a car purchase will often be unable to pay the full amount in cash.

Most will be looking for some form of finance and PCP has been a highly successful means by which dealers assist customers to obtain that finance.

Although dealers go to great lengths to explain the full financial impact of a PCP deal, most customers are interested in two things: what deposit is required and what are the monthly payments? It is those two factors which determine immediate affordability in the eyes of the consumer.

The balloon payment required to finally own the car in 2, 3 or 4 years in the future; it may be a sum which the customer knows they will not be able to pay; and importantly there is no requirement to pay that final instalment.

A customer is perfectly entitled to hand back the car at the end of the PCP term.

The option to purchase at the end of a PCP agreement is often irrelevant to the customer.

In commercial terms, there is no difference between a PCP and PCH deal.

In the eyes of the consumer, both require an initial upfront deposit, monthly payments for an agreed term and the return of the car at the end of that term.

Mercedes-Benz Financial Services were the first to publicly recognise this and persuaded the European Court of Justice in 2017 that their existing PCP product, Agility, was equivalent for VAT purposes to a long-term hire agreement.

It has taken 2 years for HMRC to react, but they now expect the industry to change its procedures within three months.

What is the Impact?

HMRC have explained the technical details in Revenue & Customs Brief 1/2019.

Under current rules where PCP is regarded as a supply of goods, VAT is due on the full sales price at the initial handover of the car.

In future, however, HMRC’s position is that if the final instalment is approximate to the vehicle’s open market value, then PCP will be regarded as a supply of services.

As with PCH, this means that VAT will only be due on the amounts the customer actually pays to the finance company and only at the time of those payments.

Furthermore, interest currently charged on PCP deals will no longer be recognised as anything other than part of the payment for the hire of the car and will therefore attract VAT.

This differs from the current position where the interest charge is VAT exempt.

The new arrangements are advantageous in two respects – VAT is deferred until the date of customer payments and is only due to the extent of those payments.

For customers who hand back their car at the end of the deal, this results in a significant reduction in the VAT cost.

However, there are two factors which means that the VAT burden to the sector is likely to increase overall. Firstly, interest on PCP deals ceases to qualify for VAT exemption.

Secondly, there is one critical aspect overlooked by HMRC in their announcement.

Under current rules when PCP cars are returned to a finance company, they are eligible for sale using the margin scheme.

However, cars returned after a lease are ‘qualifying cars’ and VAT is due on their full selling price.

This change will be significant to the used car market within a couple of years. Dealers and customers alike will need to adapt to the idea that most used cars will be liable to VAT.

It is useful to compare the same deal pre and post-change to help visualise the impact.

Table 1 shows the VAT treatment under existing PCP rules of a car which is sold new on PCP for £12,192 with an agreed final payment after three years of £6,606.

In this example, the dealer buys the car at that residual value from the finance company and resells it for £7,000. 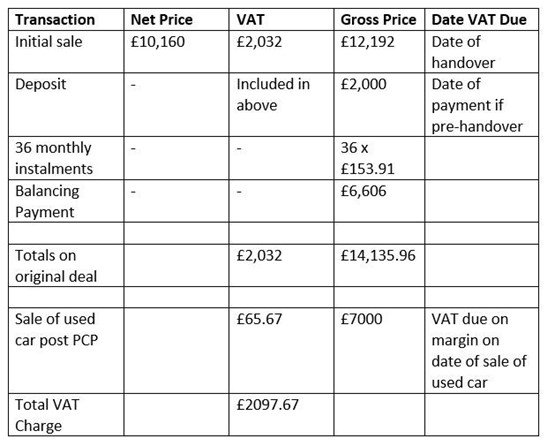 The second table shows the same deal, with the same payment profile, but with very a very different VAT outcome.

Adapting to this change will be a significant challenge to the sector.

Dealers may not notice an immediate difference as they will continue to sell cars to finance companies and will be required to account for VAT on that sale.

For the future, much depends on how the finance companies react.

The revised treatment does not apply if the final payments are set at a level which is demonstrably below market value, so revised payment profiles could preserve the status quo.

If not, new car deals may migrate to pure PCH and the used car market could shift towards VAT-able ‘qualifying’ cars.