New business volumes in the consumer car finance market fell 1% by volume but grew 2% in value in February 2020, data published by the Finance & Leasing Association (FLA) has shown.

The consumer new car finance market reported new business volumes 8% lower year-on-year (to 44,747) a month after the Society of Motor Manufacturers and Traders (SMMT) reported a 2.9% decline in registrations for the pre number plate change period.

By value, the new car finance market declined by 4% to £910 million, meanwhile. 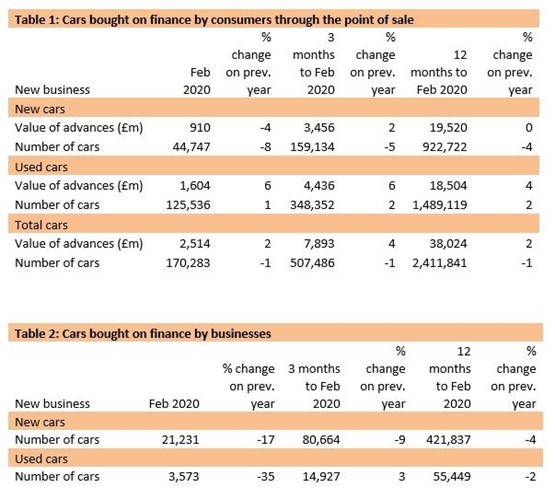 The percentage of private new car sales financed by FLA members was 91.8% in the twelve months to February 2020.

Commenting on the figures, Geraldine Kilkelly, head of research and chief economist at the FLA, said: “The consumer car finance market made a quiet start to 2020 and faces significant disruption to new business over the coming months.

“The economic impact of the coronavirus is expected to lead to a contraction in private consumption in the second quarter greater than reported in any quarter during the financial crisis.

“Motor finance is provided by a wide range of both bank and non-bank lenders who serve consumers and businesses across all sectors of the economy.

“The FLA is calling for urgent action by the Government and Bank of England to open up financial support schemes to all lenders, including non-banks, so that they can continue to provide new lending and meet the huge demand for forbearance.”

Stephen Haddrill, director general at the FLA, made the FLA’s appeal for Government and Bank of England support to echo Kilkelly’s comments.

This came almost a month after its head of motor finance, Adrian Dally, described finance as “the petrol in the engine of the economy” and urged lenders to do all they could to support motorists.