The Society of Motor Manufacturers and Traders (SMMT) has called on the Government to remove VAT from electric vehicles (EV) to boost sales after the UK’s new car sales volumes declined 2.9% in February.

The car manufacturer body believes that the exemption of EVs, hybrids and plug-in hybrids (PHEV) from the tax would cut the purchase price of an average family battery electric run-around by some £5,600 and drive an increase in the sales of EVs alone to just under one million between now and 2024. 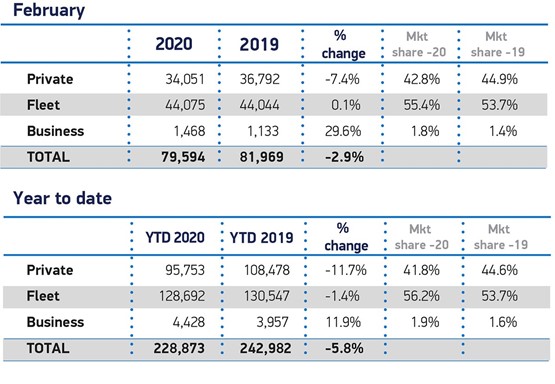 According to the SMMT’s data, February proved a good month for EV and PHEV sales as 4,566 sales delivered a market share of 5.8%.

SMMT chief executive, Mike Hawes, said: “Another month of decline for the new car market is especially concerning at a time when fleet renewal is so important in the fight against climate change.

“Next week’s Budget is the Chancellor’s opportunity to reverse this trend by restoring confidence to the market and showing that government is serious about delivering on its environmental ambitions.

“Industry has invested in the technology, with a huge influx of new zero- and ultra-low emission models coming to market in 2020, and we now need government to match this with a comprehensive package of incentives and infrastructure spending to accelerate demand.”

Car manufacturers are feeling the pressure of the EU’s CAFE emissions regulations, which dictate an average fleet CO2 limit of 95g/km from 2020/21.

OEMs breaching the limit will be fined €95 per car sale, per gram of CO2 over the limit.

AM understand that the result is that many manufacturers are reducing the number of vehicles they bring to the UK as they await the arrival of new alternative fuel vehicles (AFV) into their ranges, a point touched on in Cambria Automobiles' trading update yesterday (March 4).

Others are incentivising AFV sales through their dealer bonus structure or changes to the sales advice delivered to customers.

Hawes believes that driving the transition to zero emission motoring requires “carrots, not sticks” when it comes to encouraging AFVs' appeal to car buyers.

He said: “As the evidence shows, talk of bans and penalties only means people hang on to their older, more polluting vehicles for longer.

“It’s time for a change of approach, which means encouraging the consumer to invest in the cleanest new car that best suits their needs.

“If that is to be electric, government must take bold action to make these vehicles more affordable and as convenient to recharge as their petrol and diesel equivalents are to refuel.”

Fleet demand, however, remained stable, up by 31 registrations, according to the SMMT.

Demand for both diesel and petrol cars fell, with registrations down 27.1% and 7.3% respectively, as diesel’s market share declined to 21.9%.

Hybrids recorded an uplift of 71.9% to 4,154 units, while registrations of EV and PHEV models continued to enjoy growth, with battery electric vehicles (BEVs) rising more than three-fold to 2,508 units and plug-in hybrids (PHEVs) up 49.9% to 2,058. 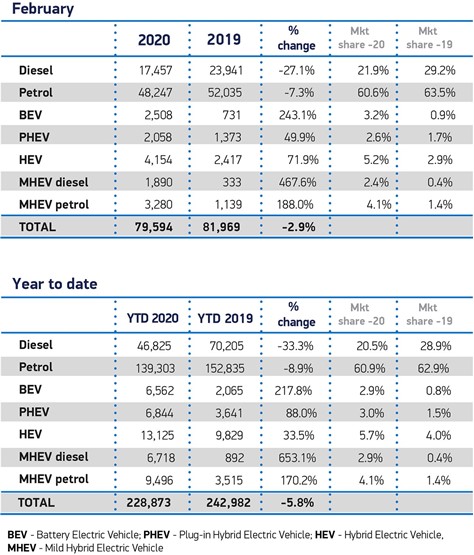 The SMMT said that OEMs will introduce more than 23 new battery electric and 10 plug-in hybrid electric cars to the UK to add to the more than 65 already on sale, but take up of these new models depends on affordability and the provision of adequate charging infrastructure.

As well as the removal of VAT, the SMMT stated that the continuation of the plug-in car grant (PCIG) at current levels and its reintroduction for plug-in hybrids should be a government commitment.

Together, it said, the measures would cut the price of AFVs by as much as £10,000, helping to deliver greater cost parity with conventionally powered vehicles.

She said: “New car sales remained challenging in the traditionally small month of February due to a number of external factors, namely the changes to emission regulations affecting manufacturers.

“It is encouraging to see that the electric vehicle sector continues to perform well, but it is vital that consumers and businesses are supported going forward to ensure a gradual and successful transition to zero-emission engines.

“Vehicles need to be affordable, with a reliable and easy to access charging infrastructure, Government incentives and investments can help.

“Overall retail spending in the UK returned to form at the beginning of the year showing signs of improving consumer confidence, which would have a positive effect also on the automotive sector.

“We look forward to seeing what the plate-change month of March has in store with the new ‘20 plate’ attracting more consumers to dealerships.”