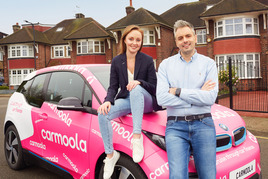 An online car finance start-up created by a team of British and Ukrainian former Movebubble and Zoopla executives has attracted £27 million in venture capital funding.

Carmoola has raised the cash through investment from sources such as Jaguar Land Rover (JLR) investment fund InMotion Ventures, VentureFriends, BCI and California-based Clocktower Ventures and plans to use it to roll-out an app that will issue car finance approvals in 60 seconds and facilitate flexible repayments.

McKechnie said: “Although new online car marketplaces have made buying the car easier, they are still using traditional car finance lenders that remain in the dark ages and consumers are paying for this.

“Underwriting is being done and reviewed manually on a case-by-case basis. Clunky off-the-shelf loan management systems are preventing companies from problem solving and automating processes, meaning there’s more manual work required in servicing loans – all of this cost is being passed onto the consumer.

“Existing lenders are also paying 15% to 20% of the loan amount in broker commission. And who do you think pays for that?”

London-based start-up Carmoola claims to “cut out the middleman”, saving buyers money with better value finance and serving up discounts for choosing green cars while breaking the rigidity of traditional contracts.

With lending secured against the value of the vehicle, which is vetted for accident history, mileage adjustments and outstanding finance, the service claims to give an extra layer of assurance protecting the consumer.

After approval of a credit limit in just 60 seconds, motorists are then given a virtual card with which they can then pay instantly, either online at any car dealership with Apple/Google Pay.

Alex Smout, principal at InMotion Ventures, said: “Up to now car finance has been clunky and intimidating, leaving many feeling frustrated and trapped.

“Carmoola has reinvented how people pay for cars, focusing on transparency and flexibility to give consumers confidence in the process and access to a greater range of vehicles.

“We look forward to supporting Aidan and his team as they grow their game-changing approach to purchasing.”

Apostolos Apostolakis, partner at VentureFriends, said: "Consumer fintech has been driven by improved user experience, but the process for applying for used car finance is opaque and frustrating.

“Carmoola has transformed the process into a user-centric app that we're confident will become consumer's preferred option to finance their next car."