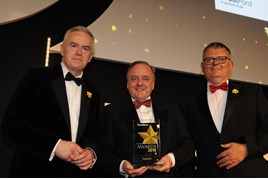 TrustFord chairman and chief executive Stuart Foulds was first to highlight the efforts of the retail groups “fantastic team” after winning the Fleet Dealer of the Year award at the Fleet News Awards.

Johnsons Fleet Services and Norton Way Corporate were both highly commended in the awards, with Pendragon National Fleet Solutions making up the shortlisted nominees.

Foulds, who received TrustFord’s award on the night, said: that the group was “delighted” to follow-up its win in 2016 with a return to Fleet News Awards success “amongst stiff competition”.

He added: “Trust Ford Fleet are a major player in the fleet arena selling this year in excess of 52,000 cars and vans to companies the length and breadth of the UK.

“Our investment in the seven-acre Long Marston preparation and delivery centre is now in full flow and that combined with an expanding fleet of mobile service vans means we really can deliver ‘Best in class’ service to our customers.

“The fleet team do a fantastic job in both sales and support and Fleet is one of my key areas of targeted growth for 2018.”