Driver training in schools could benefit road safety and the economy 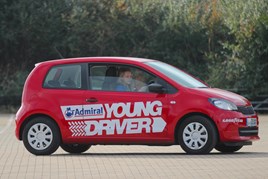 Driver training on the national curriculum could provide a welcome boost to the economy as well as road safety, campaigners have claimed.

Kim Stanton, who heads up the Young Driver scheme which has delivered 275,000 under-17 driving lessons to under 17s at its 41 nationwide training centres and in 130 schools, wants mandatory training to prepare future motorists for life on the roads.

The scheme is currently heading up a campaign to have driving added to the school curriculum, in a bid to cut down the high accident rate for young drivers.

Stanton said: “Something needs to be done to tackle the shockingly high rate of accidents young drivers have – far too many precious lives are lost, and barely a week goes by without another tragic story.

“Pilot studies in Europe have shown a 40 per cent reduction among novice driver groups who trained at school, and our own research similarly shows that Young Driver past pupils are half as likely to have an accident when they do pass their test.”

Speaking to AM, Retail Motor Industry Director Sue Robinson said that the knock-on effects of driver training in schools could be far reaching: “I think it’s important that we get to grips with road safety and understand road use from a young age.

“Mobility has always been an important aspect for young people’s careers and career development. Encouraging it to be part of the curriculum will help to ensure that young people have access to the opportunities they need and help to drive the economy too.

“They are the future work force and the future customers of the automotive industry too.

“This will also ensure that young drivers get the correct tuition, something that is a vital part of ensuring safety on our roads.”

A petition has been launched to ask the government to add driving and road safety to the curriculum, which has already gained backing from the Institute of Advanced Motorists (IAM), the RAC, the Driving Instructors Association (DIA), the Association of British Insurers (ABI), the Motor Schools Association of Great Britain (MSA), Admiral, Goodyear and Quentin Willson, motoring presenter and expert.

Stanton added: “Our petition does not suggest lowering the age at which people can take to the roads, but instead proposes youngsters should start to be taught about driving at school. The younger you can get to teens the better, as they’re far more receptive to safety messages when the pressure isn’t on to pass their test.”