AM Awards 2016 - Most Improved Dealership - Sandicliffe of Stapleford 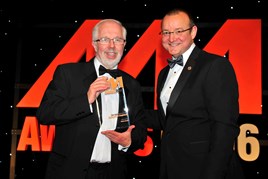 Demoralised staff and outdated facilities were hurting the bottom line at Sandicliffe’s Stapleford dealership while it awaited relocation, but an employee engagement initiative and bottom-up changes have turned its fortunes around.

Sandicliffe had agreed with Ford in 2013 to relocate to a large FordStore nearer Nottingham city centre, but the move has been delayed by a lack of suitable sites. The current site spans both sides of Nottingham Road, has limited parking, and Sandicliffe’s departments are fragmented between seven ageing buildings.

The delay left employees holding on to a promise of a new home and modern working conditions while perceiving that the current site would be maintained merely to meet safety standards. Return on sales subsequently slumped.

Sandicliffe’s management team undertook an employee survey to get honest feedback. Some staff felt uncared for, others highlighted property maintenance issues and poor communication between the isolated departments. A worker from each department volunteered for a working group to develop solutions, such as inter-department social events.

Managing director Reg Tutt shared the site’s financial results with all staff and offered them a half-yearly bonus in place of a flat-rate pay rise, if the site hit its target.

By mid-2015, staff engagement had improved significantly, customer satisfaction was improving, return on sales had doubled, and the first bonus had been paid to the staff.

The AM Awards judges said: “Having recognised staff engagement was poor, Sandicliffe’s bottom-up approach supported the people working there in making the improvements themselves.”

Previous winners: Most Improved Company of the Year