Renault: ‘We delivered on our promises to the network’ 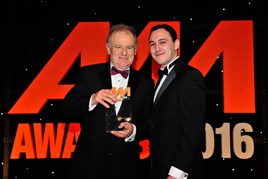 Dealers voted Renault UK as winner of the 2016 AM Award for Manufacturer of the Year in recognition of the brand’s resurgence after a torrid few years.

Claiming the accolade as the UK’s fastest growing franchise, Renault enjoyed its third consecutive year of sales growth in 2015, together with a continued increase in dealer representation.

Nineteen new dealerships opened, 13 new investor partners signed up and the 26-strong Renaultsport specialist dealer network was established. By the end of 2016, it expects 15 more sales points to be established – latest recruits to the franchise range from AM100 member John Clark Motor Group in Aberdeen to Right Car in Hull, a used car specialist taking on its first franchise.

Renault’s share of the 2015 new car market, at 2.9%, was the highest it has been for three years and new car registrations are the best they have been since 2010. That was with three core cars: Clio, Captur and, from the middle of the year, the Kadjar SUV. By the end of 2016, the brand will have launched two more core cars, the new Megane hatchback and Scenic MPV, and the company believes its dealers can expect sales growth to continue through 2017.

Combined market share for its Renault cars, vans and Dacia cars, which are sold by all its dealers, reached 4.2% share in 2015. The manufacturer has an aim for 4.8% share this year and to surpass 5% in 2017, in line with the objectives it shared with dealers in its mid-term plan.

In April, shortly before he was poached by Renault’s alliance partner Nissan, then Renault sales director Darren Payne told AM: “We have consistently delivered on what we promised with our network. In 2013, we presented our Go5+ five-year plan, with a vision and a full manifesto signed by us, the dealer network and our bank, RCI.

“The success of 2015 was based on the foundations that were put in place then, and I’m sure the award recognises the consistency we’ve had in achieving sustainable and profitable growth for them.”

Dealers are also falling back in love with the brand: the most recent National Franchised Dealers Association Dealer Attitude Survey saw Renault firmly above average, with some emphatic improvement in scores, particularly in profitability and brand recommendation.

The carmaker has set ambitious objectives for its franchise, Payne said, but it has confidence that the network has the ability to grow.

The Go5+ plan runs to the end of 2017. “For our market share, then at 5%+, the network we’ll have will be adequate for that level of share, but obviously we would review that as we develop our plans beyond that.”

When Renault rationalised its dealer network in 2012, it aimed for a minimum throughput of 400 new units per location. Now that has been achieved, it will not be abandoned.

That means individual targets are significant. But that throughput per outlet and controlling of costs brings profitability to the network.

Dealers have to achieve in all the areas of the business. With strong Renault car, van and Dacia portfolios, the carmaker expects its dealers to perform successfully with all of them.

“That gives us a strong foundation, but it does mean the network has to perform with all the weapons available to them,” said Payne.

In early 2016, Renault appointed Mark Crockett director of total customer experience (TCE), in charge of a new TCE department, aimed at eliminating the silos between sales and aftersales, and across retail, fleet and van customers. It works in conjunction with sales and aftersales departments.

The quality of the customer experience has been brought into focus now that the carmaker is moving from a sales conquest phase to one that blends the need to win new business with the desire to renew those existing customers on its four-year PCPs.

The carmaker’s national marketing activity is naturally geared towards generating showroom traffic, including arranging test drives. It has addressed concerns with the Renault Dealer

Association about demonstrators, so they are of a  specification that matches the marketing activity. Renault’s systems now know exactly which demonstrators in which specification the dealers are running, and customers can request a test drive through Renault’s website, which is relayed to dealers for their appointment to be confirmed. That appointment needs to deliver the best experience possible, said Payne.

“Our belief is that a customer who asks for a test drive is clearly intending to purchase. Those demonstrators have to be clean, be free of personal possessions, so that they are immediately available for prospective customers to test drive. We believe that test drive element is critical in the sales process.”

The network is also part way through a showroom update to the Renault Store format. By the end of 2016, 133 dealerships will conform to the format, which includes a new reception area with a brand wall and large screen, displaying engaging content. There are themed zones – the ‘Headline Zone’ shows the latest model, the ‘Passion Zone’ displays recent models, the ‘ZE Zone’ displays Renault’s fully-electric range of vehicles and the ‘Sport Zone’ showcases the Renaultsport range.

There is also a ‘Brand Bar’ area where customers can use a digital configurator to create their personalised Renault or Dacia.

“We want the customer to feel delighted with their purchase, and with their experience, and happy to recommend the brand to their family and friends. But this is not one hit for us, we want to make sure we put the right ingredients in place for sustained excellence in service, which is why we have a board director focused on this.”