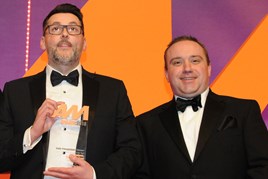 The recognition of his team’s contribution to the success of a dual-franchise dealership reflected the ethos that brought Perrys general manager Neil Hodgson to the attention of the AM Awards’ judges.

Hodgson, who runs the Ford and Kia facility on Turner Road, Worksop, was keen to highlight his “open door” policy and the “gems” in his dealership team when completing his entry for the award.

While admitting an obsession with operating controls that help to ensure every member of staff is “achieving the required budgeted gross profit on a daily basis”, a 2% staff turnover figure spoke volumes for his leadership skills.

“The whole branch has a culture of working together,” said Hodgson, who has increased the focus on used vehicle sales and greater finance penetration with the help of appointments made since 2015.

Carl Roberts’ promotion to the role of sales manager and the recruitment of Richard Sanders from Perrys Retford helped boost new car sales from 463 to 569 between 2014 and 2016 and used cars from 914 to 1,236.

This was backed by the appointment of a dedicated member of staff to produce high-quality online used car listings.

The appointment of a second business manager, Andy Daubney, helped to increase the value of F&I products sold from £280 per unit to £400 in 2017.

Hodgson said he was excited about the potential used car sales for the business: “I have a personal ambition that by 2019 we will make £1m in our used car operation.”