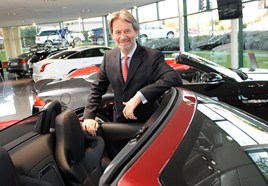 Hatfields Group has published details of record profitability in a set of 2018 annual financial results which revealed a 7% increase in turnover and 17% growth in profit before tax.

The AM100’s 55th-placed group – operator of five Jaguar, four Land Rover and one Volvo dealership across Yorkshire, the North West and Midlands – revealed that vehicle sales had increased by 6.7% to £17.3m during the year, with the number of units sold also growing by six per cent to 9,474 (2017: 8,935).

The group said in its annual results statement that its performance had been "very respectable in the marketplace and up against challenging market conditions throughout the year".

The directors added: "The directors intend that the group continues to evaluate each opportunity to grow the business. The geographical location being the logical driver."

In March Wakefield-based Hatfields followed up its AM Awards success by becoming Jaguar’s retailer of the year with its Wakefield JLR operation.

A year earlier it had claimed the AM Awards’ Best Retail Group (upto and including ten sites) accolade after judges praised the operation for being a consistently strong local hero.

Return-on-sales has remained between 2% and 3% since 2010 and its trading performance is strong across the new and used car sales and aftersales departments.

That consistency and stability has resulted from a strategy centred on the premium brands Jaguar, Land Rover and Volvo since the turn of the decade, the awards citation said at the time.