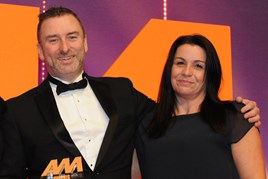 The challenges for this Vertu Motors centre have been considerable. The immaturity of Infiniti means it does not have the budget to build the brand and so the dealership’s local market did not know of its existence, plus a lack of new car volumes meant it had no walk-in traffic. This, in turn, meant it had no chance of building an aftersales business.

However, as the judges noted, the business did not take the easy route. As general manager Jeff Aynsley put it: “Most dealerships fall into the trap of concentrating on used cars and ignore the new market as being too hard. Our key decision was to not accept that we could not sell new cars.”

Infiniti Newcastle was determined to make new cars a success via “every channel we could find”, attending every local event possible with its cars, marketing in every media outlet and driving its digital marketing and social media presence.

It has paid off for Aynsley and his 12 colleagues. Infiniti Newcastle is the most profitable site for the brand in the UK, it sells more new Infiniti cars than any other dealer in the UK and it is now the brand’s third most successful dealership in Europe in new car volumes. By the end of October, it had registered 18% of Infiniti’s UK sales.

For the year to March 2017, Infiniti Newcastle won Infiniti’s European Customer Experience Award for the second time and it consistently achieves a 100% JudgeService score on ‘Would you recommend us to your family and friends?’.

Plus, as a result of great service provided in sales, Aynsley’s team has a retention rate of more than 80% among service customers, with service hours sold up 123% in the past three years.