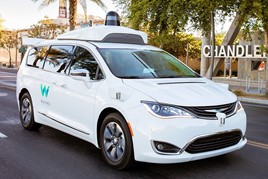 The potential for change and how dealers manage it were hot topics at the 2018 National Automobile Dealers’ Association (NADA) convention in Las Vegas.

Glen Mercer, the president of consultancy GM Automotive, said “peak hysteria” about mobility services has passed.  Short-term vehicle services have existed for decades in the rental and taxi sectors, he said, and modern technology is creating an app-led upgrade to that, not revolutionising it.

“However, if we get autonomous taxis, it becomes so inexpensive on a per-mile basis that we break the bond with owning a car. The concern in the automotive community is that the manufacturers seem to be operating as if this will happen. If that does happen, that will have significant repercussions,” he said.

Ryan Kerrigan, joint managing director of consultancy Kerrigan Advisors, said: “We just don’t see the sky is falling in relation to motor retail. The significant changes are not to be underestimated, but we really think it’s going to be not much more than an evolution of the challenges car dealers are going to face.” Rather than the business model disappearing, it will be a staged process, he added.

Erin Kerrigan, his co-managing director, said change will be driven by new drivetrains. To illustrate the speed at which she believes these will take hold, she referenced Moore’s Law, the concept that the number of transistors in integrated circuits doubles about every two years while the cost halves.

Worldwide penetration of electric vehicles is predicted to reach 25% by 2030. “While we do not think consumer-driven cars will go away in the near term, if we look at history, dramatic changes can come more quickly than expected,” she said.

In New York, cars were still rare in 1904, but 14 years later had surpassed horse-drawn transport for the first time. Autonomous transport will become widely accepted – Deloitte surveys on consumer fears about their safety recorded a 27% improvement within 12 months, and McKinsey reports that electric autonomous cars could reduce a consumer’s transportation costs per mile by 75%.

Erin Kerrigan said more dealers find they need size and scale to operate in the changing market and to cope with the decline in new vehicle margins. New cars now account for only a quarter of US dealers’ gross profit.

“The new vehicle department is simply the fuel now that is feeding the profitable segments of your business model – fixed operations and used vehicle sales. To keep auto retail in the black, and sustain the industry’s profit levels…we are seeing these companies invest more and more in this segment of the business,” she said.

About 73% of US franchised dealerships are still in small groups or single sites, she said, but the big publicly listed groups have lower-than-average expenses – they operate more efficiently, she said.

Ryan Kerrigan said ease of transaction and overall convenience is where dealers must add value to the consumer’s experience. Dealerships must become consumer-orientated, time-efficient points of commerce, not a “time-trap” where consumers are expected to spend hours. The successful dealers will shift the focus from gross margin per transaction to gross margin per consumer over the course of a relationship.

To enhance the customer experience, the industry needs to improve its people, he said, citing LPR Consulting research that 60% of new car buyers have college degrees.

“How does this compare to your workforce? How well are the personal and written interactions of your team matched with your intended audience,” he added.

Getting in early on autonomous cars

NADA delegates also heard from Mike Johnson, chief executive of Auto Nation, the US’s largest dealer group by sales, which has formed a partnership with Waymo, Google’s self-driving car project. A fleet of Waymo cars already operates in several trials, and Auto Nation dealerships are providing maintenance and monitoring services to one trial in Phoenix, Arizona.

Johnson was keen to make an “investment in learning”, so was excited by the partnership. Self-driving vehicles are extremely complex, and AutoNation needs to get in early to understand them before they become more widely available, he said.

In Phoenix, the dealer group has certified technicians who do daily maintenance on the autonomous cars, and repair minor collision damage as necessary.

Johnson said the ability to build AutoNation’s reputation as having expertise in this technology was attractive for the longer term.

The right support is also critical for Waymo – John Krafcik, its chief executive, said maintenance becomes much more valuable if it can extend the life of a vehicle from 150,000 miles to 300,000.

Waymo will add a second US market this year – Austin, Texas is its first – before looking to other US regions. International expansion is a longer-term ambition.