Is FCA's Lookers investigation a sign regulator is getting tough? 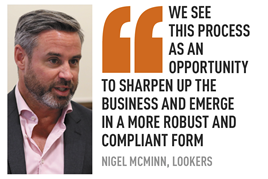 Share prices in the car retail sector’s PLCs could slide as the threat of investigations by the Financial Conduct Authority (FCA) knocks investors’ confidence.

Following the announcement on June 25 that Lookers was under investigation by the FCA over control issues in its sales processes, the AM100 group’s share price dropped 20% (to 53.5p).

The fall compounded an ongoing decline in the group’s share price, from 108p in January to 39.4p as AM went to press – its lowest since January 2010. The decline was further exacerbated by Lookers warning in early July that its earnings at the mid-year point would likely be down 25% year-on-year following a tough Q2.

A source close to the Lookers leadership team told AM that he expected this to be the first of a series of similar investigations by the FCA, however, adding: “(Lookers) will undoubtedly bear the brunt of the impact by virtue of being first, but they might equally be the first to put it behind them.”

While the FCA has yet to make any findings in its investigation of Lookers, the pertinent questions now are which retailer may be next and when, rather than ‘if’, the regulator decides to act again.

Few motor retailers were willing to say what they thought of the FCA’s approach on the record, but the boss of one AM100 franchised dealer group said: “I believe that the FCA will target the big operators if the Lookers investigation unearths major issues.

“The groups have every right to be worried because for many AM100 groups, their finance income is very substantial and a large chunk of their profitability.  This, coupled with falling sales, gives the industry real challenges and means the sector is out of favour in the City and so share prices are going south and not north.

“If you were looking to invest your hard-earned cash into a sector, for me it definitely would not be the car industry.”

The FCA shows its regulatory muscle

The FCA’s latest annual report showed it is starting to flex its muscles in its pursuit of non-compliant finance providers.

Financial penalties imposed by the regulator increased from £69.9 million to £227.3m year-on-year. The actual number of fines against firms rose from six to eight.

Of these, 101 relate to retail conduct, five to retail lending, 70 to culture and governance and 25 to mis-selling.

The FCA’s guidance on potential fines in the event of a finance provider breaching its compliance rules states that it would seek to “deprive a firm of the financial benefit derived directly from the breach”.

Depending on the seriousness of the breach, it is able to fine a business as much as 20% of any “relevant revenue”.

Lookers is ‘cooperating fully’ with investigation

A statement issued on behalf of Lookers – named as the AM100’s number two franchised dealer group by turnover (£5.1 billion) last month –  said that “at this stage, the company cannot estimate what effect, if any, the outcome of this investigation may have”.

However, the group said it was “cooperating fully” with the FCA as it investigates the company’s sales processes between January 1, 2016, and June 13 this year and “will update the market further when appropriate”.

Lookers said that “as disclosed in the 2018 Annual Report and Accounts”, the board became aware of certain matters requiring review in some areas of the business subject to regulation by the FCA during last year.

In December 2018, the board commissioned an independent review of the group’s internal control, risk assurance systems and internal audit, it added.

This review, which was shared with the FCA, indicated that there were some control issues in the sales process in the group’s regulated activities, which will require an improvement plan to be implemented.

The group said: “We have invested in both our internal capabilities and external advice. The project will be completed and agreed actions will be implemented as soon as possible.”

Nigel McMinn, Lookers’ chief operating officer, said: “We commissioned our own investigation to ensure that we were being as compliant as we could be and now we will work closely with the FCA and cooperate and comply with them in any way they see fit.

“We see this process as an opportunity to sharpen up the business and emerge in a more robust and compliant form that will benefit us and our customers in the long term.”

Mike Allen, head of research at market analyst Zeus Capital, described the FCA’s Lookers investigation as “an issue right at the top of the agenda for PLC boards across the industry”.

But, despite widespread suggestions that a potential mis-selling scandal involving GAP insurance or PCP finance could become ‘the next PPI’, Allen and other sector commentators said it was unlikely that retailers would be protecting themselves by setting aside funds to settle any potential fines or compensation in the event of a damaging outcome of an FCA investigation.

To date, banks have paid out £35.3bn in PPI compensation and a further £10bn has already been set aside to help settle claims made before the deadline of August 29.

Frank Brown, a managing consultant at financial services regulatory consultants, Bovill, said he was not aware of any specific funds being set up, but added: “If a firm knew they were facing a large redress exercise, they may do so.

“However, it is far better to spend wisely up front, and build a culture of effective control and good management, to stop the problems happening in the first place.

“In motor finance, unchecked problems can build up over time, and lead to costly redress exercises unwinding loans that have not been sold correctly – this will have a significant bottom-line impact.”

Allen said it was difficult to quantify a potential fine in the event a car retailer is found in breach of the FCA’s compliance rules, but said a “significant settlement discount” of up to 30% could be negotiated in the right circumstances.

He added that he saw any potential mis-selling litigation as “an issue for the OEM rather than the dealer”, adding that it depended on whether the claim was against the product or how it was sold.

Neil Pickles, a risk assurance partner at RSM, said: “It’s worth noting that the FCA only takes action where it feels firms have not complied with its regulatory objectives. Like most things, prevention is better than the cure.”

Failing to report early suspicions of fraudulent activity to the FCA recently left Bank of Scotland with a £45.5m fine.

It took Bank of Scotland two years to notify the regulator and the police, having begun an internal investigation in 2007 into the ‘impaired assets’ team at its Reading branch of HBOS.

“Cooperating with any regulator in an open and transparent way is always looked on favourably. Specific to the FCA, meeting this principle is not voluntary, so if any firm has any concerns it has an obligation to tell them,” said Pickles.

The Finance and Leasing Authority declined to comment on the Lookers investigation, but pointed AM readers to Principle 11 of the FCA Handbook, which states: “A firm must deal with its regulators in an open and cooperative way, and must disclose to the FCA appropriately anything relating to the firm of which that regulator would reasonably expect notice.”