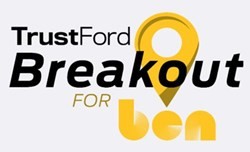 TrustFord has announced that its charity driving challenge, Breakout for Ben 2019, will be taking place again this year.

The Ford dealer group held the fundraiser in 2018 and raised £112,000 for Ben. The charity provides financial, physical and mental support for those in the automotive industry.

Stuart Foulds, chairman and chief executive of TrustFord, said: ”Ben is a hugely important charity to all of us in the automotive industry, and supports thousands of our colleagues in life-changing ways.

“Last year’s Breakout for Ben was the largest single fundraising event we have ever completed as a group, and it made us all immensely proud.

“This year we are setting out to make it even bigger and better.

“Uniting with our suppliers provides a great boost to the event, and we’re looking forward to seeing everyone’s end destinations.”

Breakout for Ben aims to have over 50 teams drive a Ford Focus or Ford Tourneo as far away from its fleet distribution centre in Long Marston as they can in 25 hours.

Prestigious awards such as the prize for the team reaching the furthest destination will be on offer.

In 2018 the various teams combined to travel over 35,000 miles, reaching destinations in Italy, Romania and Sweden.

TrustFord fully backs those that wish to get involved. No annual leave time is needed to participate, fully-fuelled vehicles will be on offer, and £400 will be allowed for fuel, food and accommodation.

Those taking part will leave at 11.00am on Thursday 17 October. Both suppliers and colleagues will take part in the challenge.