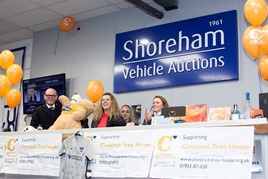 Shoreham Vehicle Auctions (SVA) has raised more than £150,000 for Chestnut Tree House Children’s Hospice with the support of the south coast motor trade.

Also, more than 13 hours of day care and 30 hours use of the hydrotherapy pool at Chestnut Tree House were pledged during the two auctions.

Catherine Stone, SVA’s dealership sales manager, said: "We would like to say a heart-felt thank you to all of our suppliers who donated auction lots and to our incredible buyers who dug deep, showing incredible generosity.

“It was also amazing to have Olympic champion, Sally Gunnell, on hand this year to support proceedings.

“Once again, we are truly humbled by the support we receive year-on-year, especially on the backdrop of what has undoubtedly been a tough year for the motor industry.”

Support was also received from Enterprise Rent-A-Car and NextGear Capital Ltd, some of which have supported SVA's fundraising in previous years.

Over 20 cars were donated for the auction.

Caroline Roberts-Quigley, community fundraiser at Chestnut Tree House, said, “We are incredibly grateful to Shoreham Vehicle Auctions and the south coast’s motor trade for their continued support and generosity.

“Surpassing the £150,000 total fundraising barrier, since the partnership began in 2011, is simply incredible.

“We need to raise £6,850 every day to pay for all the specialist care services provided by Chestnut Tree House – both at the hospice and in families’ own homes – so support like this is invaluable. Thank you to everyone involved.”

The Chestnut Tree House opened in 2003 and currently cares for 300 life-limited children, both at the hospice and in families’ own homes.

The hospice offers several types of support which includes end of life care, psychological and bereavement support, and short-break care.