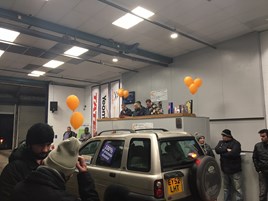 The event, which raised £25,000 in 2016, is being run in support of children’s hospice Chestnut Tree House and has already attracted donations from Yeomans, HA Fox, Tates and Caffyns.

Shoreham, which is based on the Lancing Business Park, Lancing, West Sussex, hopes to sell over 25 lots in aid of the charity at the event on Monday, November 6th and is still reaching out in the hope of adding further donated vehicles to the sale.

Catherine Stone, who has led the campaign since Shoreham began supporting The Chestnut Tree house in 2011, said: “The response we’ve had so far has been incredible and I can’t thank everyone enough.

“If anyone else would like to donate to our worthy cause, we would be hugely grateful. We want to raise as much as we can for this amazing charity.”

Shoreham’s annual charity sale kicks off at 6pm with many other items up for grabs, including a signed 2017 Brighton and Hove football.

Opened in 2003, Chestnut Tree House currently cares for 300 life-limited children, both at the hospice and in families’ homes.

It costs well over £3.5m each year to fund all the care services provided by the hospice, which is based in Arundel, West Sussex.