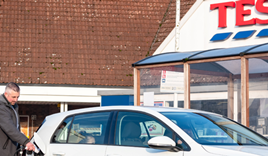 Tesco is the latest business to join the UK Electric Fleets Coalition, a group of 27 companies calling on the Government to bring forward a ban on the sale of new petrol and diesel cars and vans to 2030.

Dixons Carphone, E.ON, Heathrow, Lime and SSE have also signed up to the partnership, which was launched by the Climate Group and BT.

Combined, the coalition operates in excess of 400,000 cars and vans and wants the UK Government to target 100% zero emission car and van sales from 2030.

The Government has consulted on bringing forward the end to the sale of new petrol and diesel cars and vans from 2040 to 2035, or earlier if a faster transition appears feasible, as well as including hybrids for the first time. A decision is due soon.

Together the companies are working to electrify their own vehicles in the UK, most of them through the Climate Group’s global EV100 campaign.

All 27 members have supported adverts in the UK national press highlighting their support for a 2030 move for all new cars and vans being zero emission.

Helen Clarkson, CEO of The Climate Group said: “Only bold action can achieve the 50% cut in emissions the world needs by 2030, and the UK, as host of upcoming UN climate talks, must set an example.

“Of course, it’s not as simple as just setting a target. More government action is needed to support manufacturing of EVs and to unlock infrastructure investment. But both come with a big dividend for UK jobs. We’re in the middle of global recession – the climate can’t wait and our economy can’t wait.

“Big businesses, now including Tesco, working together through our EV100 campaign are showing that 100% zero emission vehicles by 2030 is possible. And they are using their scale to drive down costs for consumers and rollout charging points too.”

Giles Bolton, responsible sourcing director at Tesco, said: “We are delighted to become signatories of the EV100 campaign, which brings together both our commitment to transition to 100% electric vans, and our plan to install EV chargers for Tesco customers and colleagues all over the UK.

“The electrification of transport is crucial to becoming a zero-carbon business by 2035 in the UK and 2050 globally, and we will need collaboration across industry and government through the likes of EV100 in order to overcome the barriers to transition together.”