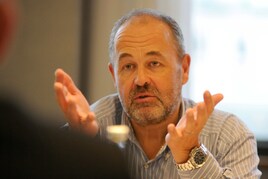 Luscombe Motors managing director Robin Luscombe has insisted that the Police and Trading Standards should not be allowed to “pick and choose” the fraud cases they investigate after falling foul of a car clocking sales scam.

Luscombe was angered by the response of Hampshire Police and Trading Standards after handing over evidence relating to the acquisition of a 68-plate Suzuki Swift hatchback which was found to have had almost 90,000 miles removed from its odometer.

The authorities refused to investigate despite evidence that the car seller and alleged culprit appears to have advertised other vehicles via carwow’s Wizzle car buying platform in recent months.

Hunslet-based Suzuki, MG Motor UK and Mitsubishi retailer Luscombe said: “I am angry about the response from the police and trading standards.

“We’ve gathered all the evidence together and presented it to them, including a fraudulent logbook, service records and invoice for the previous owner’s purchase of the car at a much lower mileage, but they have basically turned around and said the only thing we can do is pursue a case through the small claims court.

“This guy is acting as a sole trader and is currently advertising another Suzuki Swift for sale on Wizzle, using the same images but a different numberplate.

“I can’t believe it. This is fraud, pure and simple, and I think it’s wrong that the forces that uphold the law can pick and choose which fraud cases they take on.”

Luscombe said that the transaction to buy the Suzuki Swift had been initially complicated by the late arrival of his delivery driver in Portsmouth, in early June.

When the car was found to be not quite as described the decision was taken to “chip down the price” to facilitate return transport for the driver rather than walking away.

The decision left Luscombe out of pocket.

A warranty claim on the Swift, which had been advertised with 18,292 miles on the clock alongside records and claims from the owner which indicated the ex-lease car had been serviced at a Suzuki dealership, would later indicate a much higher mileage.

Enquiries with the car’s former leasing company then showed a mileage of 104,000 miles upon collection at the end of its term.

Luscombe Motors operations director, Paul Gater, told AM that the seller had stated that he was the leasee and had provided an invoice addressed to his company showing that the car was sold to him.

But Hampshire Police passed Luscombe to Trading Standards, before the case was referred back to the force, which said it could not investigate.

Action Fraud sent the case to the National Fraud Intelligence Bureau (NFIB) for review, meanwhile, but ultimately told Luscombe that “it has not been possible to identify a line of enquiry which a law enforcement organisation in the United Kingdom could pursue”.

Luscombe said: “Given the circumstances, I can’t believe the case could not be taken further.

“It gives a green light to those people who keep scheming.”

The issue costs car buyers an estimated £800 million every year.

A spokesperson for Wizzle told AM: "We have always sought to have the best and latest measures in place on our platform which has meant that mileage fraud by sellers has been almost unheard of since Wizzle launched five years ago.

"As more consumers and dealers embrace Wizzle from carwow, maintaining these standards will be of utmost importance.

"We will gladly provide support to the authorities and Luscombe Motors in pursuing this matter."