Former showrooms to be demolished for EV charging hub 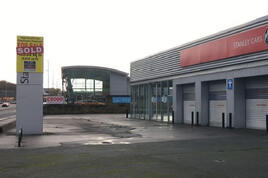 As reported by Yorkshire Live, Bradford Council and Valli Forecourts have submitted a planning application for a 24-hour roadside service centre for the former Stanley Cars site, between Canal Road and Bradford Beck.

The proposals include charging facilities for EVs, including eight charging points with solar panels on top of each, a filling station, a 545 square-metre shop and car wash. There will also be parking available for 45 cars.

The site, occupied by two vacant car showrooms – the former Stanley Cars and an ex-Lexus dealership - could both be demolished if plans are approved.

The application says the devleopment will reflect the changing nature of filling stations.

It says: "Profitability relative to fuel sales alone is poor, and therefore petrol stations have had to diversify into the modern-day roadside facility that are now commonplace on the road networks in the UK.

“Modern roadside services are not now simply used to refuel, they also provide invaluable place of respite for drivers, food to go and convenience retail.”

According to the application, the proposed filling station is “modern in appearance” using a mix of glazing and a feature black cladding panel with copper accent colour.

It says: “Given that the site has formerly been a petrol filling station and considering its location on the busy link between Shipley and Bradford, it seems logical that a such a development be reinstated on the site.

“The proposed development aims to bring jobs, amenity and access which will represent a positive contribution to the local area.”

Kia and Audi are among car manufacturers helping to propel the Ionity EV charging network to 7,000 units by 2025 thanks to a €700 million (£592m) funding boost.

A decision on the application is expected in the New Year.