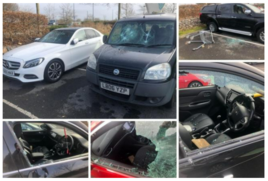 A 14-year-old boy was arrested following a late-night vandalism spree which resulted in damage to every car at WeBuyAnyCar’s Swindon depot.

The Swindon Advertiser reported that the manager of the Orbital shopping centre branch of the Constellation Automotive-owned car buying chain, Ian Quinton, discovered the damage when he arrived at work yesterday (February 7) morning.

He believed that in excess of £10,000 worth of damage had been caused to six vehicles, including a Vauxhall, Mitsubishi and a Mercedes.

“I was completely dismayed at what I found," Quinton told the newspaper.

It is that heavy bricks found in the area were thrown at the windows of the vehicles to cause the damage.

As well as smashed glass, damage was also caused to panelling.

Wiltshire Police later confirmed that a teenager has now been arrested on suspicion of criminal damage after several cars and a supermarket trolley bay.

The 14-year-old was detained shortly after 3am yesterday.

A spokesperson said: “A 14-year-old local boy was arrested on suspicion of criminal damage and has since been released under investigation while our enquiries continue.”