Lookers gears up for team bike ride to raise £150,000 for charity 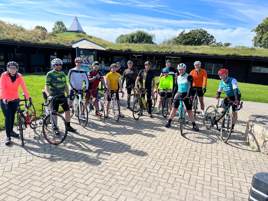 Teams from Lookers are gearing up to hit the roads and cycle more than 400 miles to raise £150,000 for charity this month.

The six-day cycle challenge will see a team of 10 Lookers’ colleagues set off from its Birmingham Lookers Vauxhall Selly Oak dealership on September 25 and travel to Ambleside, Cumbria, taking in towns and cities including Stafford, Crewe and Preston after stopping off at Lookers’ headquarters in Altrincham.

A second team of 10 riders will hand over at Ambleside before the final stage of the challenge through Carlisle, Dumfries and Ayr, with riders due to cross the finish line in Belfast at its Charles Hurst dealership on Boucher Road on September 30.

Duncan McPhee, chief operating officer at Lookers, said: “Lookers is committed to supporting communities across the UK and one of the major ways we do that is through charity fundraising initiatives.

"This year, we’ve switched it up a gear and decided to hit the road and pedal our way to smashing an ambitious fundraising target of £150,000 for two vital charities that continue to deliver vital care for our communities.

“We’re very excited about embarking on this challenge and we hope that our colleagues and customers can get behind us as we swap four wheels for two. There have been many weeks of training ahead of this event, all taking place on top of our day jobs, but I think it will be a fantastic and unforgettable experience for all involved.

“Between the two Lookers teams we will get the chance to call into many of our dealerships across England, Scotland and Northern Ireland and I’m sure we’ll get lots of encouragement along the way.”

Lookers said the event will see a qualified team of medics, mechanics and experienced riders guide and support the Lookers peloton across its UK-wide route.

Hundreds of staff, customers and partners are expected to line the route to spur the cyclists on and help raise funds which will go directly to Macmillan Cancer Support and suicide prevention charity, Papyrus.

Senior team members from the executive committee, operations committee and other employees are signed up to take part.

We are excited to announce that a number of colleagues will be cycling 650km from Birmingham to Belfast to raise £150,000 for @macmillancancer and @PAPYRUS_Charity. https://t.co/QaHNh5y7no #Lookers #fundraising #charity

Lookers' director of group operations Paul Bentley recently revealed that he is taking “time out” to pin-point his next challenge after departing the AM100 car retail PLC.

Robin Churchouse has been appointed chair of the board of Lookers Motor Group Ltd, effective from September 13, subject to regulatory approval.