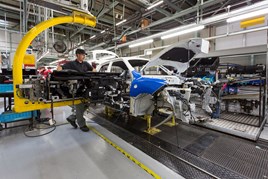 British car production increased by 15.5% in September to 158,281 units, according to the latest data from the Society of Motor Manufacturers and Traders (SMMT).

Production for the UK market led the way with a gain of 20.1% – but new car exports were not far behind with a 13.9% increase in volumes.

Mike Hawes, SMMT chief executive, said: “After the regular summer break, manufacturing plants were back in full swing in September and the gains made by the UK’s car makers are positive.

“Particularly encouraging is the recent upturn in exports, which are higher than they were in 2014, reflecting growth in key overseas markets such as the rest of Europe.

“The UK’s recent manufacturing successes are hard won and the sector will need ongoing investment and innovation to maintain global automotive competitiveness.”