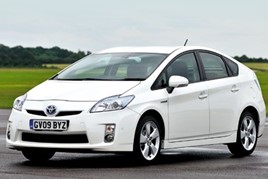 Toyota has announced a global recall of more than 2.4 million hybrid vehicles, including about 55,000 Prius and Auris models in the UK.

The recall is due to a fault in their systems that could cause them to lose power.

All those affected were produced between October 2008 and November 2014, and the cars were previously recalled in 2014 and 2015 for other reasons.

Toyota said it was not aware of any actual accidents caused by the fault, but in "rare situations", the fault could cause vehicles to stall when entering "failsafe" driving mode.

"While power steering and braking would remain operational, a vehicle stall while driving at higher speeds could increase the risk of a crash," the company said.

Toyota workshops will complete a software update to remedy the issue, said Toyota.