Seat emerged as the car manufacturer offering new car customers the biggest discounts in the latest Target Price report compiled by What Car?.

In the latest quarterly analysis by the consumer title it emerged that the Spanish Volkswagen Group brand topped a list of top dealership discounters, followed by Renault and Volkswagen.

Large SUV discounts were shown to be on the increase, meanwhile, with the savings being made by customers in the large SUV segment having increased by 5.95% between June and August, with dealers offering discounts of up to 25% on popular models. 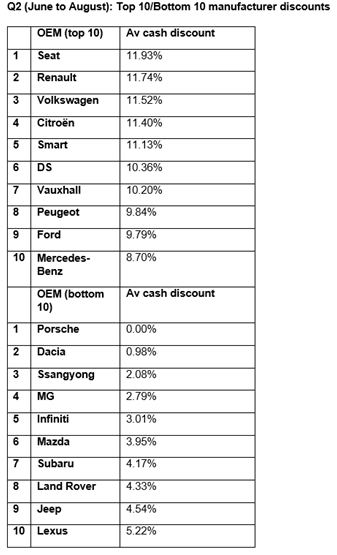 Steve Huntingford, Editor of What Car?, said: “Although overall discounts have remained static over the last quarter, our Target Price data has highlighted the pressures facing dealers, especially with changes to emissions regulations in August.

“When we compare Target Price discounts to market share it reveals the battleground in the market as rivals benchmarking pricing against each other to convince buyers to make the switch into their vehicles.

“It’s interesting to see dealers finally start to offer bigger discounts on large SUVs as traditionally these have been the hardest cars for consumers to negotiate on. The sector as a whole is still a growing market, but large SUVs tend to be diesels and the negative publicity and threat of future diesel taxes could well be having an effect.

“The fact that there are so many large SUV models for people to choose from now will has also played a part.”

Curated by mystery shoppers, Target Price reflects a fair price for customers to pay for a car.

Market analysis of over 7,000 models on sale shows discounts would have fallen further had August not been a bumper month for registrations.

A total of 94,094 new cars were registered in the UK in August, helping sustain discounts across the quarter as dealers were under pressure to shift stock ahead of the introduction of the Worldwide Harmonised Light Vehicle Test Procedure (WLTP).

The Target Price report found that deals spiked by 2.3% in August, with mystery shoppers finding almost 1,500 models available with savings between 10% and 30% off list price during the month.

The What Car? Target Price was lower than the manufacturer on-the-road list price on all but 225 cars in August.

Mercedes-Benz wins top accolade at What Car? Used Car of the Year awards 2019

Mercedes-Benz wins top accolade at What Car? Used Car of the Year awards 2019