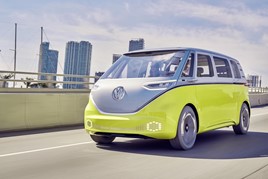 Chief executive, Herbert Diess, said that Volkswagen is implementing its electric offensive consistently and “orienting the company towards clean mobility” with the plan which also sought to ensure the sustainable prospects for the future of the two plants.

Earlier this week the Financial Times reported that Volkswagen’s board would meet tomorrow (November 16) to vote on a number of proposals which could see the group’s German plants adapted to specialise in a new wave of EV product, with some production of conventional vehicles shifting to its plants in the Czech Republic.

The move could accelerate the Volkswagen Group’s bold plan to launch over 80 new electrified models by 2025, including some 50 pure EVs, were unveiled at last September’s Frankfurt Motor Show, its sources said.

Plans to restructure the group’s vehicle production operations would aim to deliver earlier growth of its EV product, with new vehicles becoming available in greater numbers in the early 2020s.

Volkswagen’s HR board member, Gunnar Kilian, who this week outlined the principles of the manufacturing shake-up, said that Volkswagen was now “moving at full speed into the production of electric vehicles”.

He added: “Emden and Hanover are to be further model plants in Germany. Together with Zwickau, they will form the largest network for the production of electric vehicles in Europe.”

Emden will produce electric vehicles from 2022 and, in Hanover, models of the electrically powered ID.Buzz family will probably be produced from 2022 together with conventionally powered vehicles, Volkswagen said in a statement.

It added: “Production of the models currently manufactured at Emden and Hanover is to be transferred step-by step to other Group plants against the backdrop of the reinforcement of the electric offensive.

“Details of plant allocation are to be decided on by the Supervisory Board of Volkswagen on Friday.”