The majority of car manufacturers face “significant fines” as a result of a failure to reach EU CO2 emissions targets by 2021, according to a new report published by PA Consulting.

The annual ‘Driving into a low emissions future’ report published this week predicted that Volkswagen, Ford, Fiat, PSA, BMW, Daimler, Mazda and Hyundai-Kia would all miss their specific 2021 emissions targets.

According to PA Consulting’s current calculations, Volkswagen could be fined up to 1.4 billion Euros as a result of its range-wide average shortfall, but PSA currently faces the biggest impact from fines based on EBIT – amounting to 600 million Euros (20% of its 2017 profit).

A statement issued alongside the report said that Toyota remains the best performing manufacturer in the ranking, with the Renault Nissan Mitsubishi Alliance currently in second and Volvo third (down from second last year).

“Ford and Volkswagen have gone backwards and in 10th and 11th place, respectively”, it said, adding: “Daimler and BMW are making progress towards their targets and Jaguar Land Rover still has the highest CO2 emissions, but is on track to meet its specific target.” 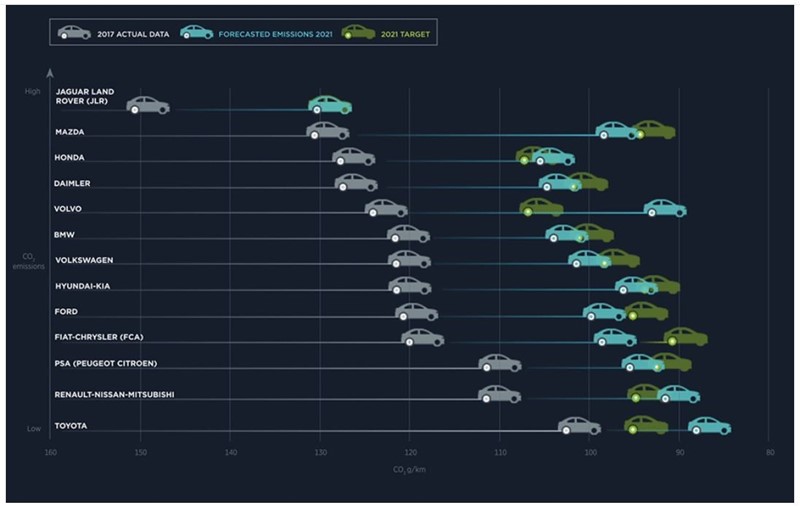 “Marketing, sales and pricing strategies that increase the take-up of low emissions vehicles will be key in getting manufacturers closer to the targets."

PA Consulting found that the September 1 introduction of the Worldwide Harmonised Light vehicles Test Procedure (WLTP) had made meeting the EU’s CO2 emissions regulations even harder for car manufacturers.

Introducing more realistic testing conditions, providing an accurate basis for calculating fuel consumption and CO2 emissions, the new test will increase CO2 emissions by an average of 20%, it said.

Schweikl added: "Car makers need to look beyond 2021. The European Parliament voted to introduce rules that would force car makers to lower their 2020 CO2 emissions targets by 40% by 2030. The final agreement could be closer to a compromise of 35% reduction by 2030 if all EU stakeholders agree on this latest proposition from environment ministers group.

"As such, car makers face a huge change in what they do as they move from the old technology of combustion engines to low emission electric vehicles. 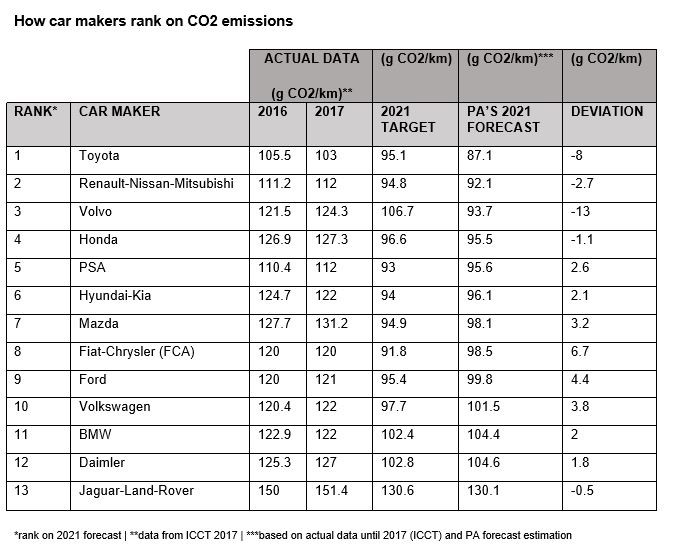 A spokesperson for the SMMT said: “Industry is committed to a low carbon future but the anti-diesel agenda and slower than hoped take-up of electric vehicles is now jeopardising industry efforts to meet the most challenging CO2 targets in the world for 2021.

"Cuts to the plug-in car grant will add further barriers; we need policies that encourage rather than confuse, which means a consistent approach to incentives and tax, and greater investment in charging infrastructure.

"This will be critical to meeting targets and avoiding crippling fines, which will only hinder industry’s ability to invest in future technologies.”