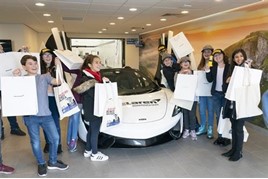 McLaren Birmingham has hosted a science and maths event with local students to encourage maths and science-based careers.

Year 7 students from Alderbrook School met engineers and designers from McLaren Automotive to find out about what inspired their own journey to the car company and how they use their skills to help “push the boundaries” of technology in the automotive sector.

The children also got a chance to sit in some of the marque’s famous models including a McLaren 570S Spider sportscar before having a chance to flex their engineering and coding brains by building and racing their own Lego cars.

The retailer-based event is a further new initiative from McLaren, which already backs the UK STEM Awards, to help broaden its extensive STEM and educational outreach to communities across the country.

McLaren Automotive’s executive director of human resources Mandeep Dhatt said:“It’s great for our STEM ambassadors who work at McLaren to help showcase their expertise to these students in the West Midlands and for them to help inspire the next generation to take-up science, maths, engineering and technology subjects.

“Not only do we want girls and boys to understand what a fulfilling and exciting career they can have by studying STEM subjects at school and beyond but we want them to see how much we value their creativity, energy and ambition which matches our own.”

As the company continues to grow, the need for a skilled workforce to design, develop, build and sell its cars is also expanding.

Having just announced record global sales of 4,806 cars for 2018, the company needs to recruit over 800 people across a wide variety of roles from manufacturing and logistics to design, engineering and support functions.

McLaren Birmingham’s aftersales manager Ian Roberts said: “We hope that this event will broaden horizons for young people in our local area and open doors to future career opportunities that they may never have considered before.”