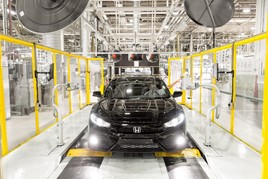 Honda UK managing director David Hodgetts has conceded that the closure of the brand’s Swindon manufacturing facility could impact the brand’s sales.

Hodgetts held the post of division manager of production planning and logistics between 1998 and 2005 – a time of considerable growth at the plant – and agreed that public perception of the brand in the UK could be affected by the plan to close the plant by 2022.

Speaking to AM at the Geneva Motor Show 2019, he agreed with the assessment that sales “could be” impacted, adding: “We do have a lot of customers who are used to buying car that is built in Britain.”

But Honda UK’s head of car, Phill Webb, said that few Honda customers were actually aware of where their vehicle was built, despite the brand’s reputation for manufacturing in the UK.

“Over the years various cars have been built in Britain and in Japan and I don’t think people really know the difference”, he said.

“For a time we did bring production of the Jazz to the UK and it made no impact on sales volumes.”

Webb added: “I think people appreciate the fact that we’ve clearly communicated the reasons for the move, and that was to further our electrification strategy. It wasn’t down to anything else. The dealers understand that and they know what that means commercially.” 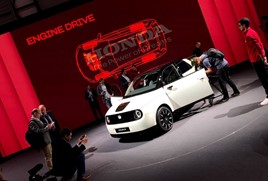 Honda announced its pledge that every car its sells in Europe by 2025 will be in some way electrified, as it announced plans to broaden its range of hybrid and electric vehicle (EV) models.

Unveiled at the Geneva Motor Show 2019 was the Honda e Prototype, which came a step closer to production readiness.

Now a five-door hatchback, Honda said that a production-ready version of the car would be unveiled later this year ahead of sales in Q1, 2020.

The Honda e hatchback should deliver “a competitive range of over 200km and a ‘fast charge’ functionality providing 80% range in just 30 minutes”, the brand said. 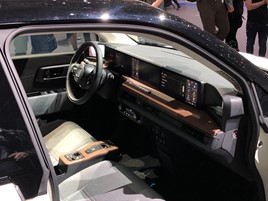 To date Honda has received 15,000 registrations of interest for the Honda e Prototype, according to Webb, which was originally unveiled at the Geneva Motor Show in 2018.

Like many brands at this year’s show, Honda said that a move towards electrification and improved profitability was at the heart of its strategy, despite a continued belief that hydrogen fuel cell technology will be the long-term future of its powertrains.

The brand announced last year that it would be shrinking its franchised retail network by 10% and Webb said that this process had been completed “organically”.

He added: “It was something that we needed to do. We are at 155 sites now and there will be a couple of further changes coming in April.”

Honda dropped 26.5 points across all questions in the National Franchised Dealer Association’s (NFDA) Dealer Attitude Survey Winter 2018/2019, which was published last week, to finish 17th out of 30 manufacturers with and ‘overall rating’ of 5.7 (down from 6.4).

It average score across all questions was 5.8, down from 6.3.

Hodgetts and Webb agreed that the timing of the biannual survey had a large bearing on the results of the survey.

Hodgetts said: “Doing a survey every six months is always a bit tricky. Ask them the same questions now, in light of the recent success of the CR-V hybrid and the unveiling of the Honda E prototype and you might find that they are feeling far more optimistic.”

Webb added: “We’ve yet to study the results of the NFDA survey but we will do and we’ll take that learning to the dealer council to see what issues we are able to address.”