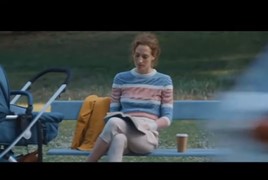 A Volkswagen TV commercial has been banned by the Advertising Standard Authority (ASA) for contravening gender stereotype rules.

The ad for the e-Golf first aired in June and begins with a scene of a woman and a man in a tent on a cliff face, implying they had both climbed the woman was shown asleep while the man was awake.

In the next scene two male astronauts are shown floating in a space ship, followed by a scene showing a male para-athlete with a prosthetic leg doing the long jump. The final scene showed a woman sitting on a bench next to a pram.

Three complainants, who believed that the ad perpetuated harmful gender stereotypes by showing men engaged in adventurous activities in contrast to a woman in a care-giving role, challenged whether it breached the Code.

Volkswagen Group UK said: “The core message of the ad was centred on the ability of the human spirit to adapt to challenges and change brought about by circumstances. They illustrated that through a number of different scenarios featuring various characters so that as diverse an audience as possible would be able to identify with the message.

“They included the final scene of the woman in the park as a relatable example of adaptation to change, as they believed that welcoming a newborn into the family was a life changing experience that would be shared by many viewers, regardless of gender. The scene served a secondary purpose of illustrating the reduction of engine noise in an electric vehicle.”

The UK Code of Broadcast Advertising (BCAP) says advertisements must not include gender stereotypes that are likely to cause harm, or serious or widespread offence.

The guidance states that ads that directly contrast male and female stereotypical roles or characteristics need to be” handled with care” and an ad that depicts a man being adventurous juxtaposed with a woman being delicate or dainty is “unlikely to be acceptable”.

In its ruling, the ASA said: “Taking into account the overall impression of the ad, we considered that viewers were likely to focus on the occupations of the characters featured in the ad and observe a direct contrast between how the male and female characters were depicted.

“By juxtaposing images of men in extraordinary environments and carrying out adventurous activities with women who appeared passive or engaged in a stereotypical care-giving role, we considered that the ad directly contrasted stereotypical male and female roles and characteristics in a manner that gave the impression that they were exclusively associated with one gender. We concluded that the ad presented gender stereotypes in way that was likely to cause harm and therefore breached the Code.”

It's not the first time VW has fallen foul of advertising regulations. Last year its Polo advert was banned as the ASA felt it encouraged irresponsible driving.