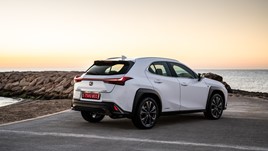 The advertising watchdog has thrown out 25 complaints against Toyota GB over its recent TV, poster and Facebook adverts for the Lexus UX hybrid.

The complainants had challenged that Toyota's description of its hybrids as 'self-charging hybrid' was misleading, because they believed it misrepresented the way the car's electric battery was recharged by using the petrol engine.

Following an investigation, the Advertising Standards Authority said it was satisfied that 'hybrid' in a motoring context was likely to be interpreted by consumers to mean that the vehicle is powered through the combination of a petrol engine and a re-chargable electric battery, and that 'self-charging' would be interpreted to mean the internal mechanics of the car would charge the electric battery.

"We considered the ads did not contain any references to other types of car, 'hybrid' or otherwise, and did not make any stated or implied claims in relation to the car's environmental impact," said the ASA.

"We therefore considered consumers would be unlikely to view the ads as a comparison which implied the 'self-charging hybrid' engine was an improvement, including by being more environmentally friendly, compared to other types of hybrid vehicle."

Lexus said it uses the term 'self-charging' to distinguish from hybrid vehicles which require plugging in.

Lexus said that the electric battery did rely on energy from the petrol part of the engine which charged the battery while the vehicle was in motion, but that it was also recharged from the braking system.

Lexus said that claim “self-charging hybrid” referred to the overall vehicle which was self-charging, rather than the battery or any other individual component.