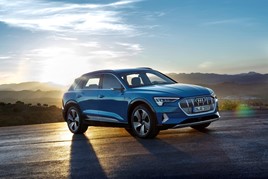 Audi has said that it will aim to save six billion Euro (£5.1bn) to fund its drive to deliver future electric vehicles (EVs) by making 9,500 job cuts at its German manufacturing facilities.

The Volkswagen Group-owned currently employs around 62,000 workers in its home country but intends to make the cuts over the next five years.

Audi has said the job cuts will be achieved through turnover and retirement and guaranteed jobs for its remaining workers until 2029.

The premium car brand has insisted that it was on track to achieve double-digit profit margins despite the costs of the transition away from internal combustion engines (ICE), the Financial Times reported.

The FT said that the Ingolstadt-based firm’s profits “have been sagging” as it readies two German factories for EV production.

Audi expects the plants in Neckarsulm and Ingolstadt to produce a combined 675,000 cars a year.

Commenting on the restructure triggered by the shift towards greater EV production, outgoing chief executive, Bram Schot, said: “In times of upheaval, we are making Audi more agile and more efficient.

“This will increase productivity and sustainably strengthen the competitiveness of our German plants.”