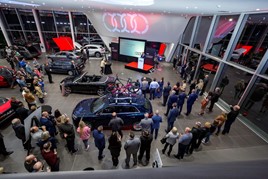 Lookers has celebrated the history of the Audi brand with a display of Le Mans winning racing cars and classic vehicles at the official VIP opening of its new flagship dealership at Farnborough.

The new 63,000 square-foot facility in Hampshire was opened to customers last month but the AM100’s second-placed car retail group marked the site’s completion in more glittering style at the event hosted at the weekend. 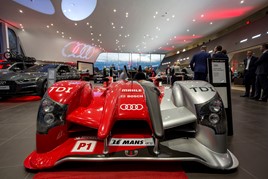 Among a host of classic Audi cars also making an appearance at the event were a 1981 Audi Quattro, a 1985 Audi Sport Quattro and the Audi R15 TDI Le Mans 24 Hours winner.

Guests were treated to a video presentation tracing the history of the Audi brand, from its inception in 1899, the introduction of its iconic ‘four rings’ in the 1930s, right through to the launch of the first fully electric Audi, the e-tron, earlier this year.

As well as receiving a grand tour of the building, guests were entertained throughout the evening by magician Paul Lytton and singer songwriter Melody Reed.

Wrigley said: “We are immensely proud to have officially opened our new prestige Audi centre here in Farnborough.

“It’s a beautiful space and provides the perfect staging to showcase the Audi range.

“Moving into the new site has given our people a huge boost and we are look forward to welcoming the next generation of iconic Audi cars into our fantastic new showroom.” 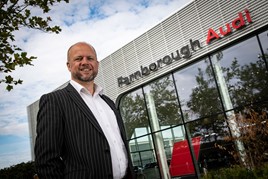 Lookers’ new Audi facility in Hampshire has come as part of the AM100’s second-placed group’s significant recent investment in the German premium brand, and follows the £3m refurbishment at Guildford Audi and a similar makeover at Basingstoke Audi last year.

The official opening of the brand-new centre follows the recent closure of Camberley Audi, with all 120 staff transferring to the new site at Templer Avenue, Farnborough.

The new centre represents a multi-million investment by Lookers and provides its customers in the South East with a larger facility and a wider choice of Audi, including around 200 used cars on site.

Features at the new Farnborough site include a 20-car indoor showroom, 30 servicing and maintenance ramps, and a customer experience that includes a digital customer presentation lounge where customers can view the entire Audi range in cutting edge virtual reality.