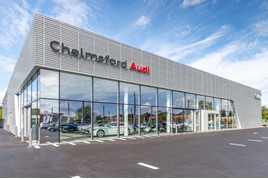 Group 1 Automotive claims to have become the first car retailer to adopt Audi’s latest corporate identity with the opening of its new 17-car showroom in Chelmsford.

Group 1 projects a 25% growth in sales and 50% increase in aftersales from the expanded business, which replaces a smaller showroom the group has operated in the town since 2003.

Darren Thompson, head of business at Audi Chelmsford, said: ‘’We are thrilled to be opening this destination centre for the people of Chelmsford.

“Early customer feedback has been outstanding and we are excited to be able to welcome visitors to this incredible facility. One which we are all extremely proud to be part of.”

Lookers opened its new 63,000 square foot flagship Audi dealership at Farnborough last month and, in July, Jardine opened its new Audi facility in Bolton after it moved ahead with plans originally developed by Inchcape.

Group 1, ranked ninth in the AM100, operates nine Audi dealerships in north and east London, Essex and Hertfordshire.

In August the group’s president and chief executive, Earl J. Hesterberg, revealed that it intended to embark on a period of consolidation in a “challenging” UK market.

In a presentation delivered by board members in Houston, Texas, on July 25, Hesterberg said that he was pleased to report revenues up 2.9% to $52.8 million (£43.4m) in the three months to June 30, but revealed a bleak outlook for the UK market.

Hesterberg described market conditions in the UK as “very challenging”, stating that the primary cause was uncertainties surrounding Brexit.

But encouragement from VW led to Group 1’s recent growth of its UK with the acquisition of five VW car and van franchises – in Chelmsford, Colchester, Romford and Southend from Inchcape Retail.