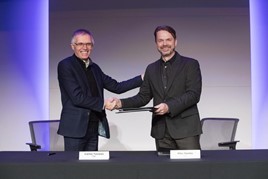 PSA Group and Fiat Chrysler Automobiles (FCA) have signed a binding “combination agreement” to begin the process of merging to create the world’s fourth largest car manufacturer by volume.

The French and Italian manufacturing giants will come together to create what will also be the third largest automotive OEM by revenue with annual sales of 8.7 million units and combined revenues of nearly €170 billion following completion of the new 50/50 partnership.

AM took a closer look at the possible implications of repercussions of the new partnership in its December edition of the magazine following coverage of the initial talks between the two companies back in October.

A statement issued by PSA this morning (December 18) said that the proposed combination will be “an industry leader with the management, capabilities, resources and scale to successfully capitalize on the opportunities presented by the new era in sustainable mobility”.

PSA said that projections for the new partnership showed the combined company would generate recurring operating profit of over €11 billion (£9.34bn) and an operating profit margin of 6.6% thanks, in part, to gains in efficiency derived from larger volumes.

Completion of the proposed combination is expected to take place in 12 to 15 months, including approval by both companies’ shareholders at their respective Extraordinary General Meetings and the satisfaction of antitrust and other regulatory requirements, it added.

Carlos Tavares, the chairman of the managing board of Groupe PSA, said: “Our merger is a huge opportunity to take a stronger position in the auto industry as we seek to master the transition to a world of clean, safe and sustainable mobility and to provide our customers with world-class products, technology and services.

“I have every confidence that with their immense talent and their collaborative mindset, our teams will succeed in delivering maximized performance with vigour and enthusiasm.”

Mike Manley, the chief executive officer of the FCA Group, said: “This is a union of two companies with incredible brands and a skilled and dedicated workforce.

“Both have faced the toughest of times and have emerged as agile, smart, formidable competitors. Our people share a common trait - they see challenges as opportunities to be embraced and the path to making us better at what we do."

The new group’s Dutch-domiciled parent company will be listed on Euronext (Paris), the Borsa Italiana (Milan) and the New York Stock Exchange and will feature a board of the new PSA/FCA enitity will be comprised of 11 members, the majority of whom will be independent.

At closing the board will include two members representing FCA and Groupe PSA employees. Carlos Tavares will be chief executive for an initial term of five years.

Back in November AM reported that FCA Group representation among the AM100’s top retail groups could grow as a period of franchise consolidation follows the manufacturer’s planned merger with PSA Group.

While joint retail sites bringing together the resulting manufacturer group’s 15 brands in any single multi-brand car retail locations were deemed unlikely by ICDP managing director, Steve Young, he said that clearly defined “winners and losers” to emerge from the new automotive giant.

In an opinion article for the same magazine, AM contributor David Francis pulled no punches in his analysis of the merger, suggesting that PSA will have to "work very hard to turn this into a dynamic, streamlined organisation".

Francis said: "It would be very easy to end up with two drunks leaning against each other for support."