Ford car line up to become fully electric by 2030 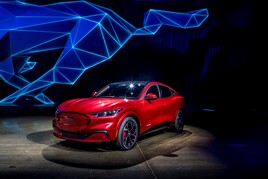 Ford has announced it will only sell electric cars in Europe by 2030, with all Ford cars sold in the continent by 2026 expected to be zero-emissions capable.

“We successfully restructured Ford of Europe and returned to profitability in the fourth quarter of 2020. Now we are charging into an all-electric future in Europe with expressive new vehicles and a world-class connected customer experience,” said Stuart Rowley, president, Ford of Europe.

“We expect to continue our strong momentum this year in Europe and remain on track to deliver our goal of a six percent EBIT margin as part of Ford’s plan to turnaround our global automotive operations,” he added.

The UK Government plans to prevent the sale of petrol and diesel cars by 2030, with plug-in hybrids allowed until 2035.

Bentley was one of the first manufacturers to outline its electric intentions. The Volkswagen Group-owned OEM has said it will only sell plug-in hybrid or electric vehicles (EVs) by 2026 and will switch to EV-only by 2030.

Jaguar will become an EV-only brand by 2025, with Land Rover planning to launch six new EVs in the next five years.

Spearheading Ford’s advance into an all-electric future is a new $1 billion (£720m) investment to modernise its vehicle assembly facility in Cologne, Germany, which currently builds the Fiesta and is one of its largest manufacturing centres in Europe.

The investment will transform the existing vehicle assembly operations into the Ford Cologne Electrification Center for the manufacture of electric vehicles, Ford’s first such facility in Europe.

Ford's first European-built, volume all-electric passenger vehicle for European customers will be produced at the facility from 2023, with the potential for a second all-electric vehicle built there under consideration. The newcomer will be build on VW's MEB platform that underpins the current ID3 and ID4, as part of a platform sharing agreement between the two brands.

The car maker has not confirmed how its existing model line-up will be affected by the transition, but the new Mustang Mach-E electric car is expected to arrive in UK dealerships this Summer.