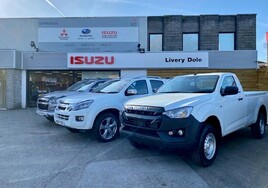 Isuzu UK has celebrated the “vital” expansion of its pick-up dealership network after Chorley Group became the latest of 16 new additions in 2021.

The Lancashire based car retailer opened its facility on Ackhurst Road on October 1 to complete a period of network growth for the Japanese brand which has been the largest since the launch of the first D-Max pick-up truck in 2012 – taking the OEM to 105 retail sites.

The new D-Max has created the foundations for the new period of growth.

William Brown, the managing director of Isuzu UK, said: “The sales success and positive reaction surrounding the all-new Isuzu D-Max has been both rewarding and challenging, with demand currently outstripping supply.

“However, with our plans for growth over the coming years, it was vital to have an expanded dealer network in place to deliver the standards of service that our current and future customers expect from the pick-up professionals.”

In the latest edition of AM magazine, we explored the current ‘pick-up paradox’, as sales in the sector surge, while choice declines.

Fiat, Mercedes-Benz, Mitsubishi, Nissan and Volkswagen have all withdrawn product from the segment over the past 18 months – leaving the way clear for the D-Max.

Many of Isuzu’s new franchised partners are former Mitsubishi retailers keen to draw on their expertise with the L200 and continue serving their commercial vehicle customers.

Back  in April, AM reported that eight of the 11 new additions at that time had been ex-Mitsubishi sales franchises.

In the northern region key appointments included Tees Valley in Darlington, Adam Purves in Galashiels and Livingstone Motor Group in Hull, along with Chorley Group.

Serving the central part of the UK, Equi-Trek opened its Sheffield based dealership in February and were joined by Close Motor Company in Peterborough in March, with Nunns of Grimsby and Rawlinson in Suffolk opening in June and August respectively.

Looking further south, Isuzu UK appointed Livery Dole in Exeter along with Hunt Forest Group, who opened two sites, with one on the Isle of Wight and the other in Blashford, Hampshire.

They were joined in April by Oliver Landpower in Tingewick and Devonshire Motors in Barnstable, who both joined the franchise in April 2021.

Livery Dole managing director, Hayden Williams, said “The vehicle on offer from the manufacturer is exceptional, and is backed up perfectly with support, professionalism and an extremely helpful team at Isuzu UK.

“Launching with new brands during the current market conditions presented by COVID and worldwide stock shortages has certainly been challenging but it seems we have chosen our new partners well and look forward to a long and successful relationship together.”

Adam Turner, the managing director of Chorley Group, said “As a multi-brand dealer group, we have vast experience of the way the partnership between a brand and dealership works.

“However, from day one we have been blown away by the simplicity, professionalism, and speed that the Isuzu team have worked with.

“From our initial contact on LinkedIn, the team have been incredible, enabling us to get the brand up and running in record time. These are very exciting times for Isuzu, and we are proud to be a part of the journey.”