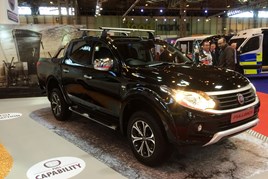 One of the major truths of the car industry is that growing segments attract more new models and the scenario had been true for pick-ups.

The car companies circle the market like hungry sharks looking for emerging segments they can attack, whether it be multipurpose vehicles (MPVs) in the 1990s or crossovers in the past decade.

However, something very strange is happening in the UK pick-up market.

Manufacturers seem to be tripping over each other in a race for the exit, yet UK sales are actually healthy.

Whether you compare pick-up registrations with those of cars or vans, there is clearly no shortage of demand (see table).

To begin with, let’s look at the shrinking pool of models. It is little surprise that the me-too (or why bother?) models have been weeded out.

The Fiat Fullback was a rebadged Mitsubishi L200.

'Fiat's Full Back. Why bother?'

Why on earth any buyer would choose their Japanese-designed, Thai-built pick-up with a zero credibility Fiat badge on the front is anyone’s guess – it was about as sensible as Fiat rebadging a BMW 5 Series as their new executive saloon.

Mercedes-Benz has also dropped its X-Class (although only a small number of people are aware there had ever been an X-Class).

This was a modified Nissan Navara (made by Nissan in Spain), which had fractionally more commercial logic than the Fiat attempt: Mercedes clearly has a better brand than Nissan and a strong presence in SUVs. 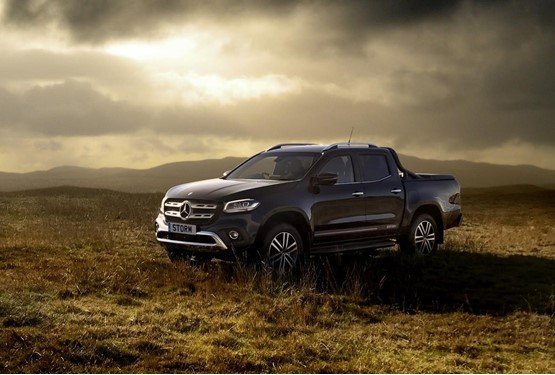 However, Nissan is extremely credible in pickups, and Mercedes owners probably found the Nissan mechanicals a bit jarring, so it turned out to be another failed Mercedes co-operation with Renault/Nissan, joining the Twingo/smart and the A-Class/Infiniti Q30.

However, the big model-related news is Mitsubishi’s announcement in 2020 that it would withdraw from the Western European market.

At a global level, it could well make sense for struggling Mitsubishi to concentrate on Asian and emerging markets, rather than persevering in its attempts to sell hatchbacks and crossovers to European buyers.

However, there is no law that says a company has to sell both pick-ups and cars. Indeed, the aftersales business of Mitsubishi in the UK has been sold to International Motors, the importers of Isuzu.

Isuzu once sold passenger vehicles in the UK, but has successfully contracted to pick-ups only.

At the same time, arch-rival Nissan has said the next-generation Navara will also be withdrawn from the EU and UK. The Navara was made in an under-utilised Nissan factory in Barcelona and, when the Mercedes X-Class flopped, there was simply not enough work to keep the factory open – it was running at around 20% capacity.

From 2022, Nissan will concentrate Navara production and sales in Asia and Africa.

Nevertheless, the pick-up market continues to do well in the UK. Its share of the overall LCV market is the same as it was five years ago.

That might not sound hugely encouraging, but it should be remembered that the overall LCV market has been booming in the past few years thanks to demand from online delivery companies – for example sales of 2.5 tonnes-plus vans are at record levels, and the overall LCV market for 2021 is expected to be at the same level as 2017. Hence, maintaining share in a strong market is a good achievement. 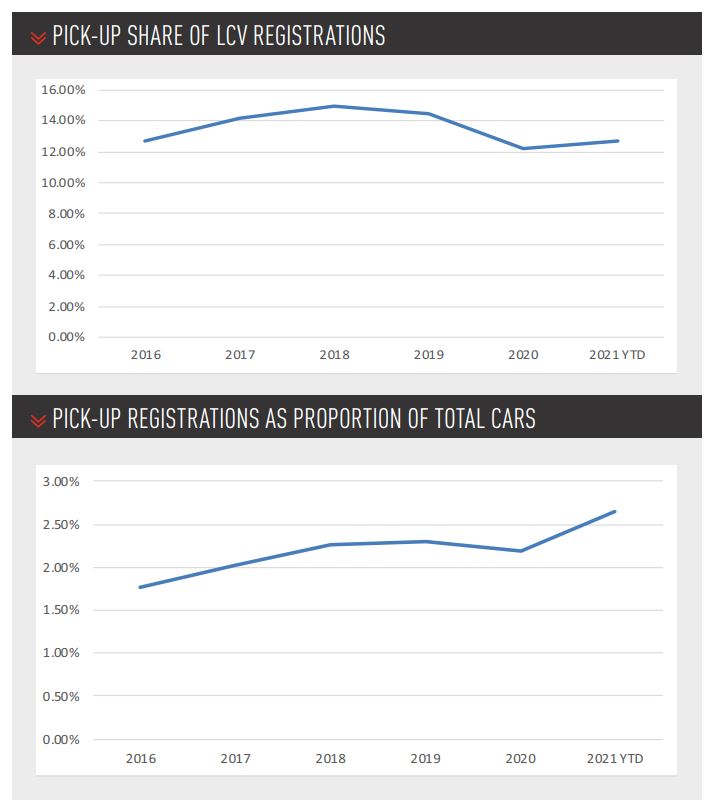 Compared with the far weaker car market, pickups are booming.

Since 2015 the relative size of the pick-up segment has risen from 1.77% to 2.64% YTD (year-to-date) 2021. There are clearly plenty of buyers for whom a pick-up is more appealing than a passenger SUV.

The net result of a strong market and weak competition is a bumper harvest for Ford. When

Ford entered the UK pick-up market with the

Cortina-based P100, it seemed like a pretty half-hearted effort that was not going to threaten the bespoke Japanese pick-ups.

Ford seemed to tacitly agree when it replaced the P100 with a series of Mazda-designed Rangers, and it was not until the current Ranger that Ford designed its own bespoke model (actually developed by Ford Australia).

By 2020, the Ranger was taking more than a third of the UK pick-up market.

That sort of segment share is a distant dream for Ford passenger cars – the last mainstream model to achieve it was the original Ka.

In the medium-term Ford’s share is only going to rise – not only will the Navara and L200 disappear, but there will be a new Ranger in 2022.

The 2022 Ranger will also spawn the next VW Amarok – Ford is providing LCV platforms to VW in return for access to VW’s electrified MEB passenger car platform.

By 2023, it will only be a slight exaggeration to say that you can buy any pick-up you like in Britain provided it is a Ford. 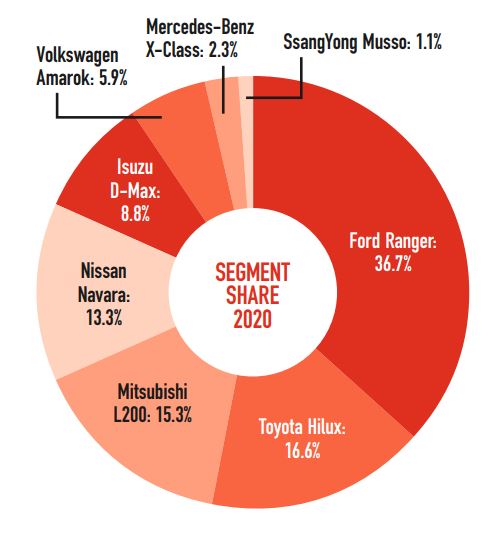 Toyota, with its everlasting HiLux (both in terms of brand name and vehicle longevity), will continue to take second place in the market, but the HiLux and the Isuzu D-Max will be about it for current competitors.

However, the key word is “current”. There are plenty of new entrants who want to disrupt the market – and looking at the figures, you can see why.

Rivian is looking at European manufacturing of its forthcoming R1T electric pick-up, and Land Rover has dropped heavy hints about a Defender pick-up.

Ford in the USA is also making bullish noises about initial demand for its forthcoming electric F150 Lightning. It says it has 120,000 pre-orders and huge customer interest.

If so, there is no reason why pick-ups in Europe could not be electrified. It could even boost the market: one of the disadvantages of internal combustion engine (ICE) pick-ups are generally their slightly agricultural drivetrain.

An EV pick-up would have a drivetrain as smooth as an EV car, and could even be marketed as a green alternative to an ICE SUV – at least for those prepared to overlook the sheer bulk of a pick-up.

Fullback to be first pick-up truck sold by Fiat dealers

Fullback to be first pick-up truck sold by Fiat dealers