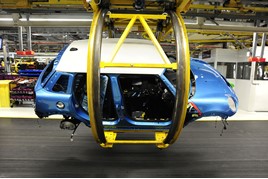 Mini production could be dealt a further blow after workers at its Oxford manufacturing plant voted to strike over an “inadequate pay offer”.

Unite the Union has rejected claims made by Rudolph and Hellman Automotive Limited, which employs the 150 warehouse workers set to take the action, that the pay offer would see the employees receive a 10% pay increase.

Unite has claimed that a 4% rise imposed without consultation in 2021, followed by a 6% rise this year, fell "below the real rate of inflation, which stands at 8.2% and rising".

Unite general secretary Sharon Graham said: "Our Rudolph and Hellman members will be receiving Unite's complete backing during these strikes, which will slow the BMW production line down or stop it completely.

"Unite will not accept a situation whereby BMW's profits are being made off the backs of low-wage workers in the supply chain.

"Rudolph and Hellman - and BMW - need to start taking account of our members' rocketing living costs and put forward an offer they can accept."

Any disruption to production at Mini’s Cowley production facility would be a further blow to the OEM after operations at the plant were suspended for a further week due to a global shortage of computer chips in February.

A Rudolph and Hellman spokesperson told the BBC that it intended to “continue with our discussions regarding pay and other terms and conditions with Unite the Union".