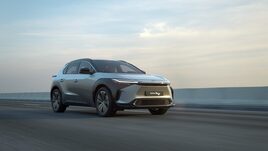 Toyota will recall 2,200 versions of its bZ4X debut electric vehicle (EV) destined for European customers after identifying a fault which could see wheels could come loose.

Notification of the recall, published by Japan's transportation ministry, revealed that a total of 2,700 of the newly-launched vehicles were affected, with 260 destined for customers in the United States, 20 for Canada and 110 for Japan.

Sharp turns and sudden braking could cause a hub bolt to loosen as a result of the fault, it said, potentially causing a wheel to come off. No such incidents have been reported, however.

Reuters reported that all of the cars recalled in Japan had not yet been delivered to customers as they were meant for test drives and display.

A spokesperson for Toyota GB told AM that he believed just one of the effected bZ4X models had reached a UK customer, adding that they were now driving a courtesy car.

An official statement issued by the brand, in which it detailed the fault, said: "Toyota is issuing a safety recall for all bZ4X vehicles in North America, Europe and Asia Pacific. Approximately, 2,700 vehicles are involved in this action.

"After low-mileage use, all of the hub bolts on the wheel of the subject vehicles can loosen to the point where the wheel can detach from the vehicle. If a wheel detaches from the vehicle while driving, it could result in a loss of vehicle control, increasing the risk of a crash.

"The cause of the issue and the driving patterns under which this issue could occur are still under investigation. No one should drive these vehicles until the remedy is performed."

UK customers have been eagerly awaiting the new EV's arrival since order books opened last December, with prices for the new model starting at £41,950.

Earlier this week the Japanese OEM revealed that it will cut its July global plan by 50,000 vehicles – to 800,000 – as semiconductor shortages and COVID-19 supply disruptions continue to impact production.