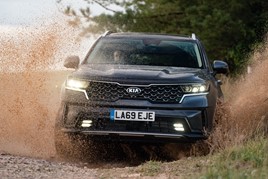 Kia Motors UK has issued a recall for its new Sorento SUV after identifying a problem with the vehicle's eCall SOS alert system.

A total of 965 of its seven-seat flagship models, which went on sale in August last year priced from £38,845, are included in the recall, according to a statement issued by the brand.

The affected vehicles were all produced between September 1 and December 14, 2020.

“However, if an airbag were to be deployed in one of the affected vehicles the VIN would not be transmitted.”

Kia said that its franchised car retailers were able to reset the eCall system so that the VIN is transmitted accurately, when appropriate. The remedy would take around 30 minutes, it said.

The Korean carmaker is now contacting owners with affected vehicles to arrange an appointment at their nearest Kia dealership for the eCall feature to be reset and updated.

Kia said that it was not aware of any injuries or accidents caused by the issue.

The new Kia Sorento was the subject of an AM magazine launch report back in the December edition.

The fourth-generation version of the SUV – first unveiled back in March, 2020 – is available in ‘2’, ‘3’ and ‘4’ designated trim levels and a choice of hybrid petrol or 2.2-litre turbodiesel engines.

A plug-in hybrid, powered by a 1.6-litre turbocharged petrol engine and a 13.8kWh battery, is set to join the line-up this year.