Return on sales drops to 1.22% as car dealers scraped a profit from January

The average UK motor dealer made a profit of £182 from January's trading, which ASE described as “a marginal but psychologically significant improvement over January 2015” when retailers produced an average loss of £59.

Whilst rolling 12 month profit advanced marginally as a result, ASE saw a drop in the average return on sales from December as a result of a 3.6% rise in turnover in the month.

Used car sales were up over 4% compared to January 2015 with a 3% increase in the average stand in value.

Jones said stocks remain high, up 3.6% in volume and 7% in value terms, and this is driving down used car return on investment. Indeed, January 2016 marked the first time when the average retailer had over £600,000 invested in used car stocks.

“We will continue to monitor stock levels as it is vital these are brought down over the coming months, particularly seeing as for some dealers total investment is understated as pre-registered vehicles are held outside used car stock until they are made available for sale.

“As we move through 2016 we expect to see rises in turnover every month and profits will have to grow significantly if we are to avoid further reductions in the net profit as a percentage of sales ratio,” Jones added. 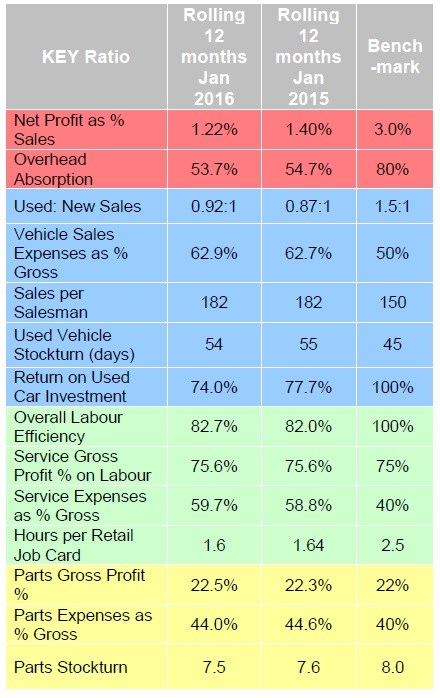