Government testing of NOx emissions has revealed that Volkswagen were the only manufacturer using a defeat device – but emissions are up to 13-times over allowed levels in ‘real world’ tests.

The results of official tests carried out by the Vehicle Certification Agency, on behalf of the Department for Transport, found NOx emissions were on average six-times higher than the legal limit when the vehicles were tested in ‘real world conditions’ instead of in the laboratory.

Topping the list of poorest Euro 5 performers – sold before September 2015 – was the Vauxhall Insignia with 1,881mg/km, compared to legislation demands of emissions below 180mg/km, while the Peugeot 3008 breached Euro 6 standards of 80mg/km with a 1,104mg/km result.

The government’s six-month programme of testing – prompted by Volkswagen’s dieselgate scandal – involved 56 vehicle types tested in Germany and 37 models tested in the UK.

Both processes involved using portable emissions measurement systems to compare laboratory results with those from a test track and typical road use.

Vehicles were sourced from car hire fleets and had completed no more than 30,000 miles during testing. They were checked for defects before being included in the programme.

Commenting on confirmation that no defeat devices were found on non-VW Group vehicles, transport minister Robert Goodwill said: "This finding is a significant step forward in assuring drivers that the serious breach of trust committed by Volkswagen is not more prevalent."

However, the tests provided further evidence that NOx emissions are higher in real-world conditions and on the test track than they are in laboratory conditions.

While this was the case for all vehicles - chosen to represent a 75% spread of the 70 most popular diesel models of recent years - results varied significantly between different makes and models.

The report stated that existing lab tests designed to ensure emission limits are met have been shown to be inadequate and this is why the UK has secured a tough new Europe-wide ‘real driving emissions’ test.

From next year, vehicles will have to meet emissions limits in real driving conditions across a wide range of typical operating temperatures.

Goodwill added: “Importantly our testing has found no evidence that other manufacturers are using software of the type used by Volkswagen.

“This finding is a significant step forward in assuring drivers that the serious breach of trust committed by Volkswagen is not more prevalent.

“We also wanted to ensure that the actions that the UK and other countries across Europe are taking are going to resolve the longer standing issue here - that emissions of NOx from diesel vehicles are still too high.

“From next year, the introduction of real driving emissions testing as part of the approval testing will deliver significant improvements in emissions.

“While the results for some of the newest cars are within the limits of this new test, it is clear that there is still much work to do.”

The below graph show the results of 'real world' test, the red line marking the average NOx emissions results from Euro 6 vehicles of 500 mg/km, which is over six times higher than the 80 mg/km official legislative NEDC laboratory test limit marked in black. 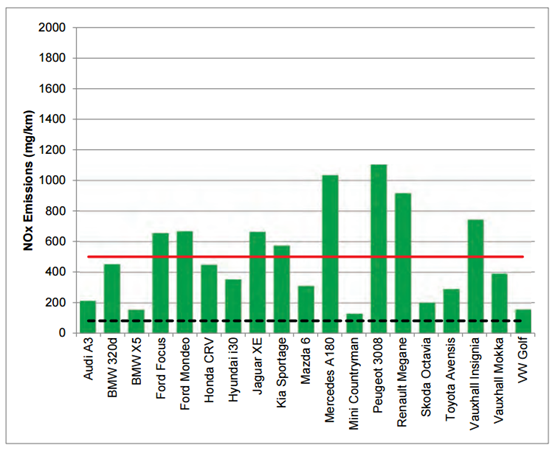