The gap over petrol and diesel-powered vehicles continued to grow, where values for the average diesel used car continue to decline year-on-year.

Pure electric vehicles increased by £750 year-on-year, while average hybrid values went up by £1,683.

In 2015 new AFVs registrations continued a remarkable growth of over 40% year-on-year to secure a new car market share of nearly 3%.

Plug-in hybrids and electric cars seem to be the big drivers of this growth with plug-ins doubling in volume, and pure electric new car registrations growing by 50%. 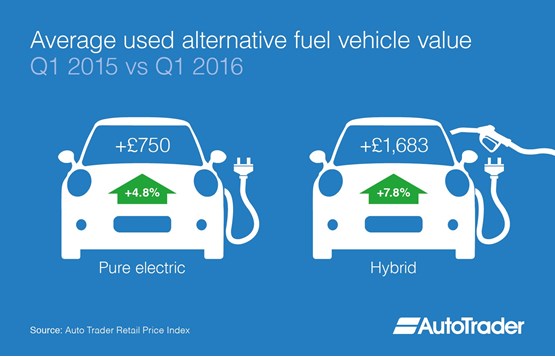 With such strong growth in the new car market, it could indicate a knock-on effect on the used market with more consumers seeking out used AFVs.

In March this year Auto Trader recorded a significant 27% jump in the number of online advert views for AFVs compared to March 2015, and while there is a growing number of them entering the second-hand market – market share for used AFVs has increased from 0.92% to 1.18% year-on-year – it could be that supply is simply not keeping up with demand.

Karolina Edwards-Smajda, Auto Trader retailer and consumer products director, said: “While we are seeing more used alternative fuelled vehicles turning up on dealers’ forecourts, the increase in ad views points to more consumers than ever looking to buy.

“Used AFV values are rising significantly with a four-digit increase as buyers are drawn in by low fuel running costs, current road tax rates that mean AFVs are often free to tax and, for some, exemption from the London Congestion Charge.

“While both electric and hybrid are growing in value, it’s the hybrid of electric and conventional power that are proving particularly popular with used car buyers. This choice offers the greatest flexibility for a consumer unlike pure electric where the more limited range isn’t suitable for all car buyers.”

Elsewhere in the market a shift in the dynamic of sales between petrol and diesel-powered vehicles is continuing to gain momentum.

While average values for used petrol cars have risen year-on-year – by £790 (8.3%) – diesel vehicles continue to be worth less on average than a comparable petrol car.

The average value of a diesel car dropped by £138 (-1.3%) and represents the eighth month diesel’s average used car values are less than a petrol’s. 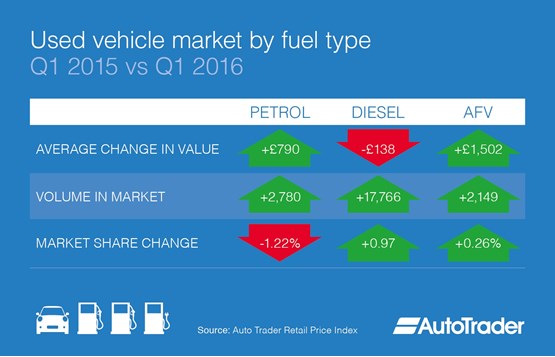 The volume of diesel cars in the used marketplace continues to grow as ex-fleet stock enters the marketplace.