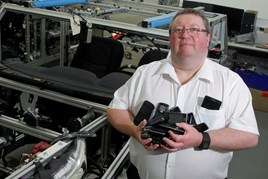 Tech-savvy car buyers are prioritising mobile phone connectivity over fuel efficiency and 20% would walk away from a brand if they could not pair their device to a vehicle, Nissan warns.

A further 13% would not buy a car that’s not connected to the internet.

Nissan employs engineer Patrick Keenan – known as “the man with 40 phones” – to ensure that it keeps up to date with the latest smartphone technology.

Keenan said: “My job is to make sure anyone who walks into a Nissan showroom anywhere in Europe doesn’t walk out again because a car they want to buy won’t pair with their phone.”

Based at Nissan’s European Technical Centre in Cranfield, Keenan’s desk drawers are packed with dozens of phones, which he uses to develop and fine-tune connectivity.

He makes and receives hundreds of test calls a day as he works on future Nissan vehicles.

Keenan added: “Today’s new cars have a lifecycle of five or six years before a new version is launched, but a mobile phone will only be on the market for less than two years before it’s replaced.

“Keeping cars and phones talking to each other is the crux of my job.”

Nissan is already establishing itself as a global leader in autonomous driving technology and is preparing to launch ‘ProPilot 1.0’ – single-lane autonomous highway driving – in Europe during 2017.

The brand described smartphone connectivity as one of the “vital pieces of the jigsaw” in its development of autonomous driving technology.