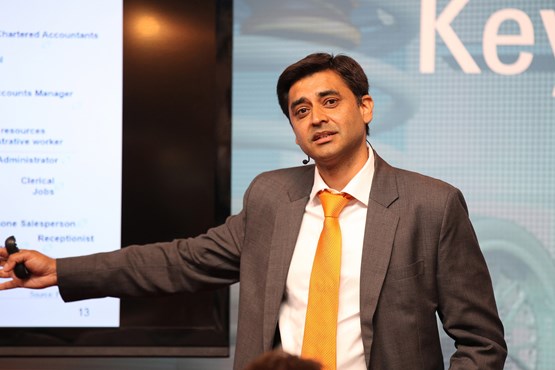 Female empowerment, digital test drive experiences and a move towards marketing a wider range of mobility solutions will all be part of the retailer's remit by the middle of the next decade.

Visitors to this week’s Automechanika aftermarket exhibition at Birmingham’s NEC benefited from a glimpse at the workshop of the future – in which a Tesla Model S took centre stage – and were able to benefit from insight into leading industry figures.

Among a breakdown of future megatrends to affect the automotive industry Frost and Sullivan senior partner Sarwant Singh told a seminar at the event that e-retail, the influence of the female motorist and the need to adapt to a market where fewer people own cars were all key issues.

The SMMT’s aftermarket development manager, Peter Lawton, warned that industry would need to re-appraise its vehicle testing legislation to keep pace with the changes, meanwhile.

Singh said: “The first thing I say to any business in the automotive sector is get an E-retail strategy. Invest in electronics and connectivity.

“While we believe that the future is bricks and clicks Britain is the online retail capital of the world so you need to be able to appeal to customers on every level.

“A few years back BMW placed 3,000 OEM parts on eBay and made over £1 million without any real effort at all.

“Whether people shop in a dealership or on the internet there is a market in both areas now and businesses need to exploit the whole market to be successful.”

Singh cited the Audi City showroom in Piccadilly as being a potential pointer to the retail outlets of the future, being urban and utilising simulators and virtual reality to give customers “fully rounded impression of the car before they buy it”.

He said that 50% of visitors to Audi City already bought a vehicle without taking a traditional test drive.

A move to a less personal style of car sales might appeal to the female drivers which Singh suggests will spawn a new area of bespoke showrooms tailored to their needs.

He said: “For the first time there are more women with driving licences in the US than men.

“Women are driving more miles and taking more trips by car than men.

“I believe the future will bring more dedicated car models and offerings for women.”

Singh suggested that the dawn of the fully-autonomous car was still around 12 years away but suggested that the greater threat to the automotive retail sector would be a shift away from car ownership, with car sharing initiatives like Zipcar and BlaBlaCar currently leading the way, along with Uber.

He said: “Take the driver out of the equation and the price of mobility will tumble.

“In future, perhaps the most compelling mobility solution will be a card or account – like an Oyster Card – which gives access to the bus, train, taxi and use of a car when needed.”

Whatever the future of automotive mobility the SMMT’s Peter Lawton wants to ensure that MOT testing keeps pace.

He said: “It took until 2012 to see the government introduce testing of stability control systems within the MOT.  It was not new technology by then.”

Currently lobbying the government alongside the IAAF, IGA, GEA and NTDA on the government’s proposed move to an MOT test after four years – rather than the current three – Lawton said: “Currently the law says that taxis should undergo statutory testing every three years, but I suspect many are clocking up more than 120,000 miles in that time. With new mobility solutions comes new challenges and the government has to keep pace with that.”

Commenting on the potential change to a 4-1-1 MOT testing pattern, Lawton said that around 22% of cars fail an MOT test after three years, meaning that the change would leave 522 potentially dangerous vehicles on the roads each year.

He said: “With the consultation we are undertaking I think we have an ideal opportunity to lobby the government as far into the 21st century as we possibly can.”