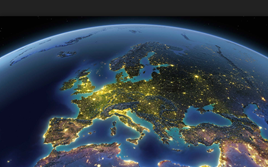 This decline can be attributed to there being one less working day in October in several markets and indicates that after months of consistent growth the market is heading towards an peak, said analyst JATO Dynamics.

Despite October’s decline, its results still represent the second highest October registrations since 2009 – showing how strong the market is on a macro level despite month-on-month fluctuations.

In October the biggest manufacturers all saw their market share fluctuate.

Volkswagen Group, Renault-Nissan, PSA and Ford all posted market share declines whilst the premium manufacturers BMW and Daimler, along with FCA, Hyundai-Kia and General Motors all gained ground.

PSA posted the biggest market share drop of all the manufacturers, losing 0.73% of market share as a result of its three brands – Peugeot, Citroen and DS Automobiles posting declines in registrations of 4.7%, 9.1% and 28.9% respectively.

This decline was driven by significant decreases from the manufacturer’s core brand Volkswagen which dropped by 8%, as well as Porsche which posted a 12.2% decline.

This increase was driven by the Lancia and Alfa Romeo brands with both posting double digit growth of 24.5% and 21.3% respectively.

Daimler also increased its market share by 0.39 percentage points as a result of the strong performance of Mercedes which increased its registrations by 6.7% which was enough to offset the 0.5% decline of Smart.

Felipe Munoz, global automotive analyst at JATO Dynamics, said: “As the growth in the market slowed in October, it was the manufacturers that rely most heavily on the Southern European countries or premium brands that performed the best.

“This shows that the market is shifting and going through a transition phase and we would expect the market to continue to fluctuate over the coming months.”

In the segment ranking, SUVs continued to perform well, with 302,851 registrations in October: a 12.1% increase on the same month last year.

The MPV segment showed the biggest market share decline of more than 1%, and a significant decline in registrations of 10.9%.

Amongst the model ranking, the Volkswagen Golf maintained its lead, despite a significant drop in sales that saw its registrations decline by 21.2%, as a result of the continuing impact of its emissions issue, and the expected fall in demand as a result of the imminent launch of its 2017 Model Year.

In contrast, the Golf’s main rival, the Opel/Vauxhall Astra was the fifth best-selling car in Europe, its volume was up by 55.8% and it gained the most market share of any of the top 20 best-selling models with an increase of 0.65 percentage points, largely due to the launch of the new generation of the model.

The subcompact segment was dominated by the Ford Fiesta, which posted an increase of 7.5%.

Amongst the SUVs, the Volkswagen Tiguan regained its position as the best-selling SUV after losing the top spot to the Nissan Qashqai in September.

The Tiguan posted a significant increase of 52.5% which was largely due to the launch of the new generation of the model in April 2016.

Amongst the premium models, the Audi A3 was the best-selling vehicle with 16,288 registrations in October.

The Volkswagen Passat was the best-selling midsize car, registering 16,113 vehicles, despite this being a 22% decline on the same period last year.

In the city-car segment, the Fiat Panda was the best-selling vehicle, registering 15,032 vehicles.

Munoz said: “In October we saw the impact of the new generations of the Opel/Vauxhall Astra and the Volkswagen Tiguan.

“Both helped offset the significant losses suffered by both manufacturers’ other models.” 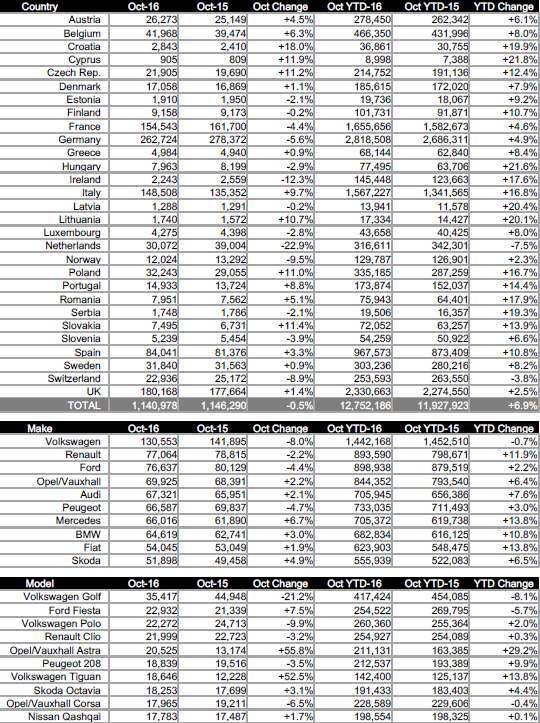