New car registrations in Europe in January were up 9.4%, to 1.2 million units, compared to the same month the previous year.

This is the second highest result for January in a decade, thanks to an increased number of promotions and incentives across the 29 markets analysed by JATO Dynamics.

All of Europe’s largest five markets posted an increase in registrations, with Germany experiencing the highest increase of 10.5%.

This can be attributed to improved economic conditions and consumer sentiment, combined with lowered interest rates, said JATO.

France came in second, posting a healthy increase of 10.4%.

This is due to there being two more working days in the month, increased sales to rental companies, and brands registering stock vehicles in January, in order to sell them later in the year – a common practice used to achieve objectives and take advantage of bonus season. 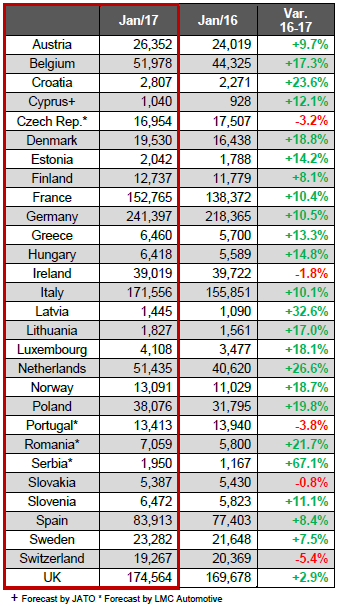 “The positive results in January show that the boom of 2016 has continued into 2017.

Increased incentives and stronger promotions are pushing consumers to purchase now. In the UK, anticipation of increased prices post-Brexit and the impending VED tax changes are driving growth, whilst in Germany lower interest rates are beginning to take effect.

“A range of economic and socio-political factors are benefiting the automotive industry and it will be interesting to see if the sector can improve upon the strong results of 2016,” commented Felipe Munoz, JATO’s global automotive analyst.

Among the 29 markets analysed, the Netherlands experienced a significant 26.6% increase in registrations.

This was partially due to a shift in tax policy, with many dealers registering cars last month, to benefit from the new lower tax rate of 22% which came into effect in January 2017 (compared to the previous tax band of 25%).

Volkswagen led the brand ranking, although it is growing at a slower rate than the market average as the brand’s traditional models, such as the Golf and Polo, were overtaken by newer rivals. The Tiguan, Europe’s best-selling SUV, helped boost the brand’s performance.

The Volkswagen Golf maintained its lead, and sales remained stable, but the model is losing ground ground to its rival - the Astra. However, Volkswagen’s recently updated Golf is expected to revitalise its sales over the upcoming months.