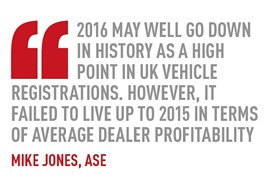 Average franchised dealer profitability has slumped by more than a quarter in three years as intense competition for new car customers and pressure on margins have impacted motor retail.

ASE Global, which publishes average profitability statistics for the UK, remarked at the end of 2013 that average dealership return on sale for the year was then at its highest, at 1.47%, since it began recording such data.

Mike Jones, ASE Global chairman, said: “2016 may well go down in history as a high point in UK vehicle registrations. However, it failed to live up to 2015 in terms of average dealer profitability.

“This was not a surprise given the reaction of the manufacturers to several years of under-calling the size of the market when they set dealer targets for 2016. This resulted in dealers working harder for less with turnover going up and profits falling.”

He believes the decline in profitability is principally down to a fall in profits from vehicle sales, as a result of increased targets squeezing margins and hitting the average profit per unit.

Dealers increasingly self-registered units to hit targets and subsequently retailed these cars as used vehicles, so ASE recorded an increase in used vehicle sales. Used car return on investment levels remained strong, Jones said, but further focus is needed on this aspect in 2017, with particular effort on reducing the days in stock.

There was good news in aftersales, with increased service contribution, however this was not sufficient to maintain overhead absorption levels in the face of increased operating expenses from ever-larger facilities, he said.

Pre-registrations is a big issue currently for almost all dealers, according to consultant and industry analyst Piers Trenear-Thomas, and that is impacting their profitability.

He said: “The pre-registration numbers reported by manufacturers in accordance with the Supply of New Cars Order 2000 regulation are risible. Who are they kidding? If you look at the difference between what the manufacturers are reporting as pre-registrations and the actual number that their dealers are having to take and report as retail sales, we have one of the biggest deceptions of the industry.”

The problem is that the funding burden and the disposal burden sits with the dealer, tying up cash. Trenear-Thomas said that while interest rates are low and money remains fairly cheap it is a manageable issue, but some banks may decide to examine their covenants if the dealer is holding onto too much stock for too long.

“The things which are draining the dealer’s profit opportunity are the over-supply push in the market and all the franchise standards, box-ticking and demands to refurbish the showroom every five years or so,” he added. Dealers are being burdened by “non-genuine overheads” such as these and franchise requirements to increase the ratio of non-productive staff to monitor and manage these overheads, but who don’t actually add value to the customer.

Many of these are in place because manufacturers desire to control their franchisees and to give the customer a consistent experience.

Trenear-Thomas said many franchised dealers can still improve their aftersales efficiency significantly and drive higher profits as a result. Although some complain of reduced margins due to service plans, particularly those free or discounted ones as part of manufacturer’s new car customer offer, he said dealers should spend more time identifying and eliminating waste in their workshops, such as times when technicians are idle or the need to correct previous work.

Doing so would allow them to reduce their nominal retail labour rate while preserving margin, and make their servicing attractive to more customers, he said.