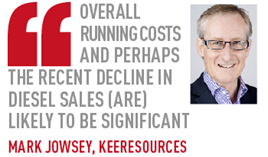 The new Vehicle Excise Duty (VED) system will create anomalies. It is introduced on April 1, a month into the new ‘17’ plate. In many cases, the  showroom will contain exactly the same models, but with vastly different road tax requirements. Two or three years later, when those cars return to the forecourt, there may be some small impact on the used car market – the cars registered in March may sell faster.

Under the new system, first-year VED rates will continue to vary according to CO2 emissions, with owners of higher-emitting cars paying more, then a simpler three-tiered system comes into play.

VED for zero-emission cars is £0 from year two provided they are priced at less than £40,000. Vehicles emitting any CO2 attract a standard VED rate of £140 after year one and owners of vehicles with a list price of more than £40,000 including zero-emission vehicles have to pay an additional rate of £310 for the following five years before reverting to its standard rate.

Philip Nothard, retail and consumer editor at Cap HPI, said: “March 2017 is set to be the biggest on record and vehicles will flow back into the market on different cycles.

“On used vehicles, consumers are likely to roll up VED into the total cost of ownership calculation. With high-end cars, the VED is effectively an irrelevance when compared to the price paid for the vehicle.

“Longer-term residual value (RV) forecasts will remain unaffected because the changes represent a small increase in overall running costs of a vehicle.

“While we may see isolated variances, the changes will have minimal, or even zero influence on a vehicle’s market value.

“If a dealer has two identical cars on a forecourt, one with a lower annual VED cost, it won’t necessarily attract a premium, but will support a quicker sale compared to its equivalent counterpart.”

Rupert Pontin, head of valuations at Glass’s, said: “A short-term trend may emerge where vehicles entering the market which are three years old and subject to the former VED rates could realise a greater return. These are likely to quickly wash through wholesale channels and activity will return to normal.

“It is highly unlikely the buying public will even remember these changes in three years’ time and in some cases it makes the vehicles cheaper to tax, anyway. It may well affect the decisions of people considering a car that originally cost £40,000 or more and they may factor in the additional costs they will incur over the course of the forthcoming years that the £310 supplement applies. However, if this becomes widespread we are likely to see dealers increasing screen prices to allow for this and to protect margins.

“There will be very little impact to the used car market in 2020 as a result of these changes. I would be more worried about what further VED increases are around the corner for cars registered before April 2017, as history shows it is unlikely that they will remain unchanged for very long.”

Kee Resources, which provides automotive lifetime operating cost and value data, also identifies the biggest losers as cars with a list price more than £40K since it attracts the additional fee. Hence buyers of a three-year old car in this price range will pay the £310 premium for another three years.

However, the impact on residual values will be limited, according to director Mark Jowsey: “There will be an undoubted advantage for many vehicles up to end-March 2017 registered on the prior VED regime for a considerable time.

“We see other factors, notably overall running costs and perhaps the recent decline in diesel sales as likely to be as significant and we are already factoring these into our forecasts. Some market distortion will be caused on higher-emitting vehicles seven years and older where they gain a £140-a-year VED versus a prior cost of more than £500 a year, which will have some RV effects.”